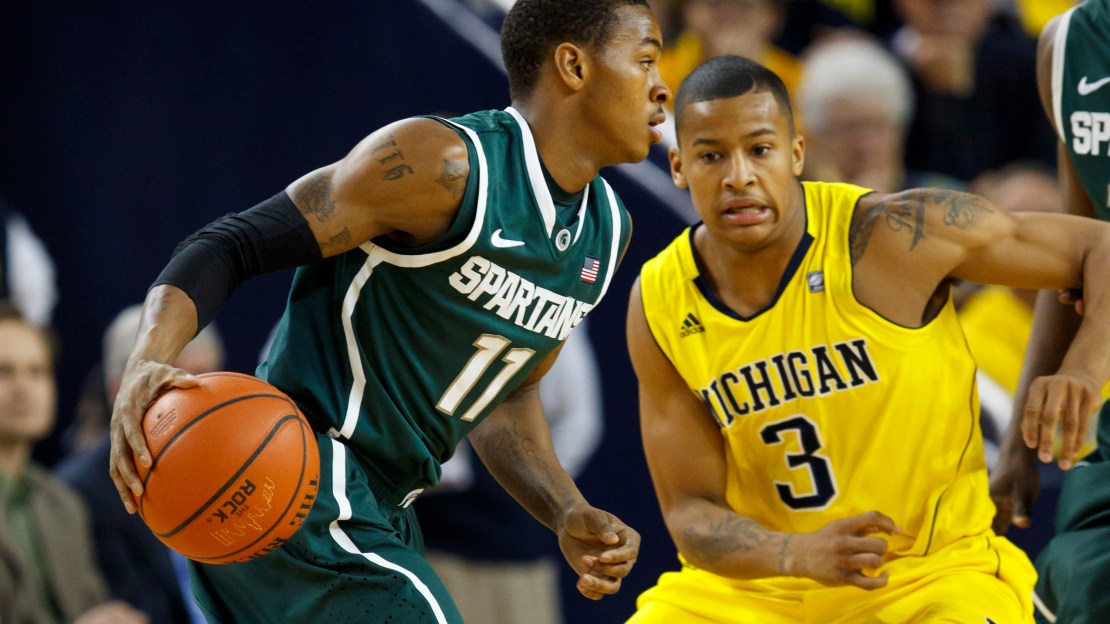 Get ready to hear a lot about it: Michigan and Michigan State play on Tuesday in what easily is the biggest game of the week in the Big Ten. Heck, I?m gonna call it the ?Game of the Year.? Why? Because I can. So, let?s start daily links here. Nick Baumgardner of MLive.com say history rarely has seen both programs playing at a very high level at the same time ? until now. That makes this clash even juicer.

When the Michigan and Michigan State clash at the Breslin Center on Tuesday night, they'll do so as top 10 programs for the first time — ever. Oh, and it also is a must-win game for the Wolverines if they hope to claim the Big Ten regular-season crown.

Yesterday?s titanic clash between Indiana and Ohio State provided some great theater  with the Hoosiers scoring perhaps their biggest victory of the season. And they needed it coming off a stunning loss at Illinois on Thursday. The Hoosiers made a statement-a big statement-with that emphatic victory vs. the Buckeyes.

And star Indiana guard Victor Oladipo says ?We want to be the last team standing.?

Well, that may be the case if they play like they did in Columbus. When Indiana is clicking, there is not a better team in the nation.
For the Buckeyes in the loss to Indiana, it was more of the same: Deshaun Thomas did more than his share of the heavy lifting-but he got little support.

The conclusion of Bill Livingston of the Cleveland Plain Dealer: Ohio State is a one-man team that is going to have to control tempo and play ugly-a la Wisconsin-if it wants to win.

Well, looky here: Illinois suddenly is hot, coming off a second consecutive win over a ranked team-this time at Minnesota–which followed the Illini?s stun-the-world victory over No. 1 Indiana on Thursday. And Illinois star Brandon Paul says ?We?re having a lot of fun.?

I am sure they are. These are Illinois? first back-to-back wins in nearly two months after dropping eight of 11 games. And the Illini now have five wins over ranked teams.

?I don?t think anyone on our team had given up,? Paul said after the Gophers win. ?As long as we keep fighting, I think good things are ahead for us.?

Maybe even an NCAA bid-if Illinois can get to 8-10 in the Big Ten. The Fighting Illini are 4-7 right now.

That?s six losses in eight games for Minnesota following its home loss to Illinois last night. Amelia Rayno of the Minneapolis Star-Tribune wonders if the Gophers are in quicksand.

Rayno feels the biggest concern with this Minnesota team is that it can?t seem to fix its woes. The loss to Illinois was no different - brought on by poor shooting (36.7 percent), turnovers (13 overall), a disjointed offense (no one able to find open spots except Austin Hollins) and the failure to defend the perimeter (Illinois had 11 3-pointers).
Someone call 9-1-1.

The Badgers continue to confound foes, remaining in the thick of an ultra-competitive Big Ten race despite entering the season amid low expectations from most pundits. It makes you wonder: Could this be the best job Wisconsin coach Bo Ryan has done in his career?

His mentor thinks so.

Former Purdue star Robbie Hummel had a banner in his honor raised to the rafters of Mackey Arena. And, it almost brought him to tears. The Boilermakers sure could use Hummel right now.

It seems Pat Harty of HawkCentral.com was rankled by Urban Meyer?s comments last week that called out Big Ten coaches about their recruiting. Speaking of recruiting, if you thought it already was crazy-it?s about to get wilder with altered rules that go into effect in August and that will allow for more unfettered contact between coaches and players.

That?s correct: Starting August 1, it will be OK for a coach to call a prospect 10 times a day and text him constantly. (Insert your favorite text acronym here, like OMG.) Also, sophomores can now receive offers and schools could assemble staffs whose sole purpose is to recruit.

With several days to analyze the Nebraska recruiting class, see what this group of experts who cover the Huskers think of Bo Pelini?s latest haul. It looks like Nebraska did well in the trenches on both sides of the ball and got a pair of big-time running backs in Terrell Newby and Adam Taylor.

This just in: Michigan feels speed at receiver is overrated. Instead, size is what matters. And the Wolverines got plenty of it at wideout in their most recent signing class.

?Speed is overrated," Michigan receivers coach Jeff Hecklinski told Kyle Meinke of Mlive.com. "Obviously, it's something we have to have. But speed is overrated. How can you truly judge the speed of a high school kid on the perimeter when maybe he touches the ball three times a game??

Interesting. Let?s clip and save this.

Again I say, Michigan has to win in East Lansing on Tuesday — otherwise, you're in a 2-game hole, and you're wishing and hoping.

My take: So, this is must-win for Michigan? No doubt about it.

My take: Christian Watford has more points than legendary Scott May? That is difficult to believe.

Simple: Get to 8-10 in #B1G. Clinched. RT @maynard528: @WernerESPNCU What does Illinois have to do at this point to clinch a tournament bid?

My take: That?s the recipe, Illinois. Can it do it? The Illini are 4-7 in the Big Ten right now.

#Gophers surely won't be ranked today for first time in 10 straight weeks. But maybe that's what they need to be underdogs again.

My take: Perhaps, but time may be running out on Minnesota getting back on track.

Illinois, Minnesota and Iowa are the Big Ten's strange teams this season. Can't get a good read on any of the three

My take: Join the club, Jeff.

A year ago, I could never have imagined Oladipo would turn into this kind of shooter. Shows you what hard work can do.

My take: And he just may be the Big Ten player of the year.

#Badgers have six home victories over top-five teams in last seasons. Tied for best in nation with Pitt.

My take: How good is Bo Ryan? I mean, seriously? Pure basketball genius.