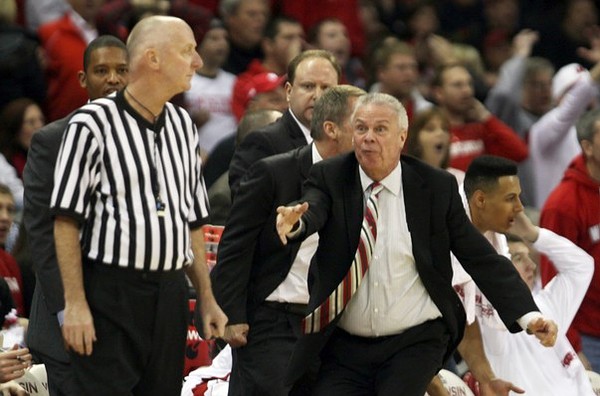 Wisconsin picked up an overtime win over Michigan in a contest with plenty of late-game drama. Wisconsin and Michigan both found themselves with plenty of fouls to give at the end of regulation on Saturday, but neither team opted to hack to deprive the opponent of a desperation heave.

While I believe Wisconsin committed error when it opted not to foul Michigan before Tim Hardaway Jr. knocked down a three-pointer to break a tie with just a few ticks left, I don? think Michigan did anything wrong by forcing Ben Brust to make a contested 40-foot runner at the buzzer. While Hardaway?s shot wasn?t easy, it probably doesn?t rank among the top 10 most difficult shots in Hardaway?s career. If you foul Michigan before he takes that shot, then the Wolverines are forced to restart the offense all over again and get a good look within a few seconds. That?s more difficult than Hardaway?s three from the top of the circle.

Brust?s shot, on the other hand, was next to impossible. Making 40-footers is tough enough, and Brust had a hand in his face. Is there really a substantially more difficult shot that one can envision, that justifies the risk of inadvertently sending the opponent to the line for three free throws? I submit that there is not. .

(Of course, having written all of that, I come to find out that Beilein in fact wanted his team to foul, it just didn?t happen. In that case, I think both coaches got it wrong, but Beilein was lucky that his team didn?t listen, but even more unlucky that Brust hit a near-impossible shot).

Of course, Bo Ryan won the game, proving that the outcome does not always reward the coach that made the right calls within the last 10 seconds. No, Wisconsin won because it took Michigan out of its offense. You see, Bo Ryan has become a bit obsessed with the three-pointer, as mentioned in College Basketball Prospectus: 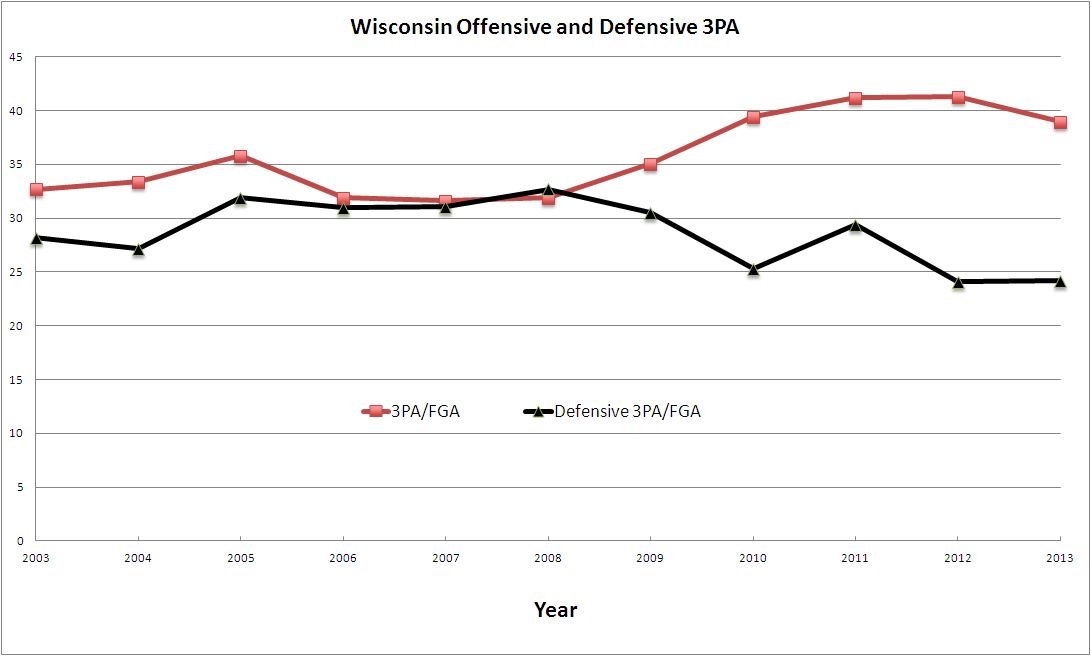 This year is no different, as no one in the Big Ten prevents more three-point attempts than the Badgers, and only Northwestern shoots more of them on offense. It?s no secret that Beilein?s offense revolves around the three-pointer, but on Saturday the Wolverines devoted just a hair over a quarter of their shots to threes, well below their season average. What?s more is that UM was inaccurate from distance, converting on just 28 percent of their attempts. Wisconsin, meanwhile, was undeterred behind the arc, as over 40 percent of its shots were threes, which also happened to find the net over 40 percent of the time.

It comes as no surprise to me that Beilein has beaten the Badgers just once in his years at Michigan, because Ryan?s defensive philosophy of closing out hard on the three-point line, while leaving the help defense to sag in the paint, seems laser-focused on stopping spaced-out offenses. Some coaches just have a kryptonite, and much in the same way as Bo Ryan would prefer to avoid Iowa, I?m sure John Beilein does not want any more of the Badgers this season.

Meanwhile, Indiana righted the ship with an impressive road victory in Columbus. As Boromir would say, one does not simply put up 81 points on the Buckeyes. Up until Sunday, Ohio State had only given up more than one point per possession to one Big Ten team-Michigan. But the Hoosiers didn?t care about any of that, blasting Ohio State?s defense to the tune of 1.25 points per possession-the most OSU has given up to anyone in a little over a year. What might be even more impressive is that almost all of the scoring came from just three players. Victor Oladipo, Cody Zeller, and Christian Watford combined for 70 points on a mere 32 shots. Indiana may have lost its #1 ranking this week, but it remains atop the Big Ten (which in my view, is the more important metric).

The Big Ten race thus continues to be wide open, with any of Indiana, Michigan, Michigan State, Wisconsin, and even Ohio State having a reasonable shot at taking home the crown. Hopefully the bruises those teams inflict on one another over the final few weeks of the season will not hurt their seeding in the NCAA Tournament, because frankly, there ought to be at least two #1 seeds (and probably a couple more top-3 seeds) hailing from the Big Ten this year.

Illinois finished off the best week of its season when it picked up a road win at Minnesota. The Illini looked terrible out of the game, turning the ball over 4 times in the first 7 minutes. They also missed their first 8 field goal attempts. But the next 45 possessions was a different team entirely.

Minnesota, on the other hand, struggled with turnovers all game long, effectively negating its huge inside advantage. Rebounding nearly half your misses and holding the other team to 27 percent shooting on two-pointers is normally an automatic win, but turning the ball over on a quarter of your possessions complicates things. I?m not quite ready to hit the panic button on the Gophers-but I?m close. They have just three home games remaining, and one of those is against Indiana. That said, there are still a couple of entirely winnable road games left on the schedule, so I still expect Minnesota in the field as of now.

Iowa took care of business against Northwestern. This was a close game until the Wildcats lost both Alex Olah and Jared Swopshire to injury, at which point the defense completely fell apart. Iowa ended up shooting 53 percent on their frequent two-pointers, which fueled an offense that scored well above 1.1 points per possession. This was a game that Iowa had to win to stay on track for an NCAA Tournament bid, though the biggest game of the year (for Tournament purposes, at least) looms large next Sunday when the Hawkeyes host Minnesota.

Michigan State bulldozed Purdue in a basketball game that occasionally interrupted a free throw contest in West Lafayette. Whenever the combined 58 free throws failed to keep the crowd rocking, you were sure to see just about every kind of shot one could expect to see in basketball game, provided one is a recent time traveler from the year 1985 (the year before the three-point line was installed). There were just 17 three-point attempts in this game, and just 5 of those were converted, so if you blinked you might have missed them. Despite trailing by double digits throughout the second half, Purdue took the unorthodox strategy of hoisting just 5 three-pointers over the entire game. Needless to say, it didn?t work. To be fair, a big part of that was due to D.J. Byrd?s disappearing act (22 minutes, 1 field goal attempt, 4 turnovers, 5 fouls). Were it not for the turnovers and fouls, one would be sure Byrd was interviewing for a spot at the Milford School.

The win helps Michigan State keep pace with the rest of the conference leaders, with a showdown against its in-state rival scheduled for Tuesday.

Finally, Penn State likely sealed its winless fate when it failed to pick up a road victory at Nebraska. To get an idea of how bad Penn State?s offense is this season, the Nittany Lions scored 53 points on 63 possessions, and that was right at its average in conference play. Jermaine Marshall was the lone bright spot, scoring 16 points on 10 shots, while committing just one turnover. Dylan Talley led the way for the Cornhuskers with 16 points (12 shots) to go with 7 rebounds. The best remaining hope for a win for PSU comes on Thursday when it hosts Iowa. Beyond that, Pat Chambers? team only has two more home games-against Indiana and Wisconsin. So yeah, I don?t foresee much joy in Mudville.

A lot of good ones this week as we enter the stretch run of the regular season. First up is the in-state battle between Michigan and Michigan State. If the Wolverines lose, they?ll suddenly be two games back in the standings. The highlight on Super Wednesday is Illinois? attempt to follow through on its big week by getting back at Purdue, and Thursday will feature Minnesota trying to right the ship at home against Wisconsin.