No. 1 Indiana bounces back, tops No. 10 Ohio State 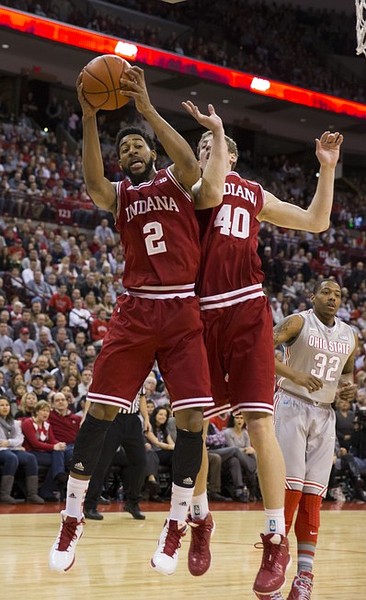 Victor Oladipo scored a career-high 26 points, Cody Zeller added 24 and Christian Watford 20 to lead No. 1 Indiana back from a demoralizing loss to a huge road win in beating No. 10 Ohio State 81-68 on Sunday.

The Hoosiers (21-3, 9-2 Big Ten), who dominated the second half, were coming off a stunning collapse that might have caused the undoing of many teams. On Thursday night at Illinois, the Illini went on a 13-2 run to close the game, with Indiana turning the ball over late and then allowing an uncontested layup at the buzzer of a 74-72 shocker.

Deshaun Thomas, the Big Ten's leading scorer and an Indiana native, had 26 points for Ohio State (17-6, 7-4), which dropped two games back of the Big Ten leaders with seven games left.

Clark Kellogg: "Victor Oladipo is like a baby's bottom…"

FINAL: Victor Oladipo scored a career-high 26 points and grabbed eight rebounds to lift No. 1 Indiana to an 81-68 win over No. 10 Ohio State on Sunday at Value City Arena in Columbus. Cody Zeller had a big game, too, with 25 points and eight rebounds for the Hoosiers, who shot 53 percent from the field (26-of-49) 22-of-28 from the free throw line. Christian Watford chipped in with 20 points. Deshaun Thomas scored 26 points and pulled down seven rebounds for Ohio State (17-6) in the loss. Aaron Craft shot 6-of-11 from the field and scored 16 points for the Buckeyes.

In my opinion, the #Hoosiers hadn't beaten a team they weren't supposed to beat all season until today. Best IU win of the season.

Will Sheehy could avg 20 on other teams if he was featured on offense. #Hoosiers @hoopsoncbs

Craft just fouled out on an illegal screen. And that was a good call. #iubb

Ohio State with incredible defensive effort will hang in this game. Lots of hoops left. Indiana with/30 tremendous minutes. Can they finish?

Indiana has finally realized that by Zeller establishing the inside, HE WILL HELP everyone else's game! Cody dominating in Columbus

For #Ohio State, Deshaun Thomas has 20; other eight players have 24. #IUdepth

Sheehey starting to find his outside touch? That would be a game changer.

A dominant road win over top-10 Ohio State would make it easier to forget what happened in Champaign. Seems to be the goal for Hoosiers.

Indiana is showing today why the other Big Ten contenders should send gift baskets to John Groce. That's a huge result in this race.

Think OSU has another run in it, but have to get stops.

Thomas has 18 pts, no one else more than 6 for #Buckeyes. A familiar refrain. #buckbk

A year ago, I could never have imagined Oladipo would turn into this kind of shooter. Shows you what hard work can do.

I have reserved myself from jumping on the LaQuinton Ross bandwagon, but I think it's time to get him in the game.

Amir with his 3rd foul and to the bench again 36 seconds into the second half. #buckbk

People need to stop griping about what Christian Watford isn't + start appreciating what he is. Very solid college stretch 4-man.

HALFTIME: Victor Oladipo scored 14 points and Cody Zeller scored 12 points for No. 1 Indiana in the first half to carry the Hoosiers to a 41-33 lead over No. 10 Ohio State. Oladipo and Zeller both are doing work on the glass, too, with five and six rebounds, respectively. Christian Watford added 10 points the Hoosiers, who shot 50 percent from the field in the first half. Indiana, however, only hit 3-of-11 from downtown. Aaron Craft is putting together a nice game so far for Ohio State. The junior has six points and five rebounds.

EMERGING THEORY: Victor Oladipo is a hologram. Actual people can't do that.

#Buckeyes offense goes into bizarre funks where one player shoots five times in a row. #BuckBuckGoose

Man this Indiana-Ohio State game has been physical in the first half.

Golly a great game in Big Ten. What are the odds?

Just love watching Indiana on offense. They share the ball as well as any team in America.

Indiana 9-4. Zeller got first touch at offensive end at 19:05, has three more since. Lesson learned from Illinois loss.

Doesn't get any better than Vic Oladipo vs. Deshaun Thomas. #Hoosiers #Buckeyes

Bob Knight on the video board: "I used to coach a little bit, and there's nothing better than Ohio State basketball."

Indiana is second in the nation in scoring differential, averaging 21.7 ppg more than its opponents #IUBB

IU vs OSU today…Do the big games ever stop in the big ten?