Illinois cards another upset, wins at No. 18 Minnesota 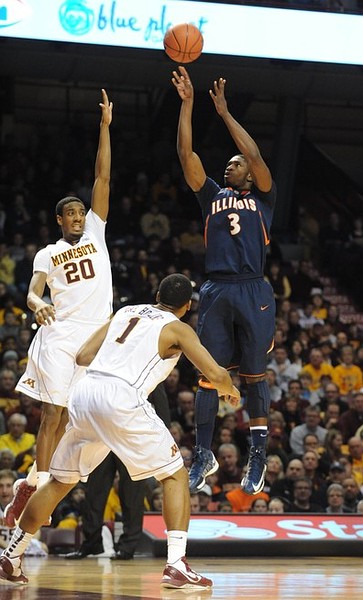 Tyler Griffey capped a terrific week for Illinois with 16 points, and the Fighting Illini went 11 for 23 from 3-point range in a 57-53 win over No. 18 Minnesota on Sunday night. Three days after Griffey's buzzer-beating layup gave Illinois (17-8, 4-7) a 74-72 victory over No. 1 Indiana, Tracy Abrams swished a step-back 3-pointer with 18 seconds left to stretch the lead over Minnesota to four.

D.J. Richardson had 13 points and Brandon Paul added 10 points for the Illini, who ended a 10-game losing streak on the road against ranked Big Ten teams. Their last such win was three years ago at Wisconsin.

FINAL: Illinois pulled out a second consecutive upset with a 57-53 victory over No. 18 Minnesota on Sunday at Williams Arena in Minneapolis. Illinois (17-8) went into the locker room with the momentum and came out of the second half flying as well. Tyler Griffey contributed 16 points, hauled in four rebounds, and made 4-of-7 three-pointers for the Illini, who won despite shooting 38 percent (18-of-48). The Illini were very good from distance, however, nailing 11-of-23 3-pointers – good for 48 percent. Other Illinois scorers in double figures included Brandon Paul (10 points) and D.J. Richardson (13 points). Trevor Mbakwe had a good game for Minnesota (17-7) in defeat with 13 points and 10 rebounds.

Huge win for Illinois. Very favorable schedule ahead of them. Can gain some serious confidence in the next two weeks. #illini

I still think D.J. Richardson has another big shot left in him tonight. Just a hunch. #dechr

After a slow start it looks like the #illini got their #swagger back!! Got to finish strong now!

This game is the #illini entire season. Resume road win. Plus the schedule gets easy.

This game is fitting the mold of everything the #Gophers have struggled w/ lately. Poor shooting exposes turnovers even more. #Illini

Sometimes it's better to be lucky than good. Can't imagine Groce wants McLaurin shooting a lot of those.

Joe Coleman and Andre Hollins are shooting a combined 2-for-14. Rest of the team is 11-for-21. #Gophers

Minnesota with 20 points in the paint. #illini with 6.

Really, I am going to lose my "F"ing mind. These are the moments that I wish I was playing!

Groce changes up 2nd half lineup. Abrams and Griffey in. McLaurin, Bertrand out. I like it. Go with the guys that are clicking.

Second half underway at Minnesota. Illinois leads by 1. Would be unbelievably impressive if Illini avoids the IU hangover and pulls it off.

HALFTIME: Illinois trailed No. 18 Minnesota late in the first half before going on a 17-4 run to take a 31-30 lead into the break. D.J. Richardson gave the Illini their first lead with a buzzer-beating 3-pointer, his third trey of the half. Richardson leads the Illini with nine points, while Brandon Paul and Tyler Griffey each chipped in with seven. Illinois made it rain from long range, shooting 50 percent (5-of-10) from three-point land. Minnesota had 10 offensive rebounds in the first half, leading to second-chance opportunities. Austin Hollins has a game-high 11 points to pace the Golden Gophers, who also got eight from Trevor Mbakwe.

Those last 20 seconds for Minnesota are basically a coach's worst nightmare come true.

DJ the Assassin kills big #gopher lead w/back to back treys. #illini down 26-22 w/314 left. Should feel very encouraged to be this close.

Eventually, I think Illinois will get a field goal. I think.

Of course just as the starters had gotten into a groove, we get a lineup change. #Gophers #Illini

Will it be Doctor Three or Mr. Brick for Illinois today?

Joe Bertrand gets start in place of Abrams. Puts some pressure on Brandon Paul to handle the ball. Expect Minnesota to pressure him. #dechr

Elliott Eliason starting for #Gophers vs. #Illini instead of Rodney Williams, who has a shoulder injury. Might come off bench.