Wisconsin upsets No. 3 Michigan in overtime 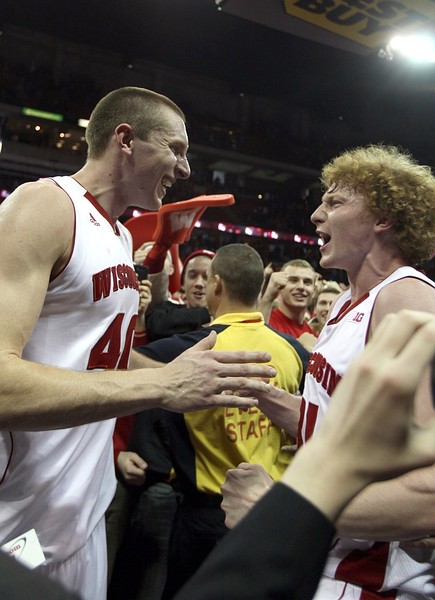 Ben Brust hit a shot from just inside midcourt to tie the game at the end of regulation and added a tie-breaking 3 with less than 40 seconds left in overtime as Wisconsin beat No. 3 Michigan 65-62 on Saturday.

[ RELATED: Watch the Badgers celebrate in the locker room ]

Jared Berggren drives for highlight-reel And-1:

Mitch McGary with the putback:

Ryan Evans throws it down:

FINAL: Ben Brust hit the game-winning shot with 40 seconds left in overtime and Wisconsin beat No. 3 Michigan 65-62 in overtime on Saturday at the Kohl Center in Madison. The field goal was the finishing touch on Brust's 14-point performance in a dramatic win for Wisconsin (17-7). The lead changed hands 12 times. Mitch McGary had a good game for Michigan (21-3) in defeat with 12 points, eight rebounds, and 6-of-10 shooting from the field. Jared Berggren sparked the Badgers, as he contributed 13 points and corralled nine rebounds in the victory. Traevon Jackson was 3-of-5 from the floor and chipped in seven points for Wisconsin.

That's why you foul. Over and over again we see it.

Tix for Big Ten hoops must be the best value in sports. Never leave early and OT all over the place.

Evan Turner all over again… this time, though, the game continues…

Hardaway Jr. may — emphasis MAY — have just won the Big Ten for Michigan after Bo Ryan screws up again. And Dan Dakich calls him out.

How could Wisconsin NOT foul there? You have to foul.

Michigan is playing 2 on 5

Tim Hardaway Jr. is playing some of the best basketball of his life of late.

Wisconsin can;t handle all the back and forth… calls a timeout for rest

Trey Burke's 2nd 3-pointer of the game ties him with Dugan Fife for 17th in career 3-pointers at Michigan (103).

Mitch McGary is the guy that everyone wants on their team, but everyone hates when he's on the other.

HALFTIME: Wisconsin led No. 3 Michigan late in the first half, but allowed the Wolverines to use a 15-5 run to take a 29-28 lead into halftime. Neither team has been able to take control of the game as the lead changed hands five times. The Wolverines have been able to keep Wisconsin's leading scorer, Jared Berggren (11.8 ppg), under control thus far. The senior enters halftime with three points, on 1-of-5 shooting. Sam Dekker provided a huge spark off the bench, scoring a game-high nine points in the first 20 minutes for the Badgers, who racked up seven assists on 11 baskets. Michigan, which accounted for eight assists on 13 field goals, was led by Trey Burke and Tim Hardaway Jr.'s seven points apiece.

I think Robinson needed the rest, to be honest. He looks tired. Legs don't have the same jump to them right now.

Mitch McGary gets all his stats from PLAYING HARD…… Another young player that gets it…. He understands his role and plays it WELL

It'd be so Wisconsin for the Badgers to beat Michigan today.

Love what Ben Brust is giving the #badgers lately. Really aggressive shooting and attacking from perimeter.

Just one shot attempt for Burke in the opening 8:49, and he missed it.

It may seem like this UW/UM game is a matchup of different tempos, but UM is actually No. 278 in adjT. Wisconsin is No. 323.

Kohl Center is basically empty about 10 minutes to tip here — students are here, everyone else is either asleep or … asleep.

Official prediction (for what it's worth): #Badgers benefit from the Kohl Center magic and win, 62-59.

They're playing Ke$ha at the KC and the #Badgers are bopping as if they're in a dance club.

Bo Ryan, "Michigan doesn't have a lot of weaknesses… I see them as the most talented team in the league."