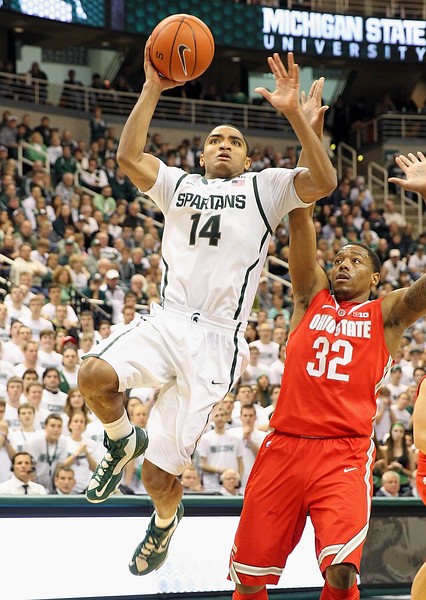 BTN/BTN2Go has two Big Ten men's basketball games this Saturday as Northwestern plays at Iowa at 4:30 p.m. before No. 12 Michigan State plays at Purdue at 7 p.m. We spoke with Michigan State freshman Gary Harris about Saturday's big game.

Michigan State coach Tom Izzo isn't sure where his team would be if not for the efforts of Harris, though the freshman hasn't been the only one playing through pain as the Spartans are tied for first place in the Big Ten. The banged-up Spartans look to earn a fifth straight victory over host Purdue.

"I knew it was going to be hard.," Harris told BTN about playing his freshman year in the rugged Big Ten. "We're 20 games in and I played 20 games all last year in high school … The everyday grind is really taking a toll."

Led by Harris, who scored 15 points and hit 4 of 8 from 3-point range in 36 minutes despite being noticeably bothered by back spasms, Michigan State (19-4, 8-2 Big Ten) won for the eighth time in nine games since dropping its conference opener at Minnesota on Dec. 31. Read the full game preview here.

Also, Saturday: Michigan plays at Wisconsin at noon while Penn State faces Nebrasaka at 9 p.m. There are two men's games on Sunday, including Illinois at Minnesota at 6 p.m. ET on BTN/BTN2Go. The Illini come off Thursday's  stunning victory over No. 1 Indiana and need wins to keep their NCAA tourney hopes alive. Indiana plays at Ohio State at 1 p.m. Sunday.

BTN.com's Tom Dienhart polled a number of Big Ten writers in search of the Big ten's toughest player. Who is your choice? Now go find the player)s) our panel picked. Also, Dienhart answered your Big Ten questions in the weekly mailbag.

Enter any of our fun ongoing contests for a chance to win some really unique prizes. Want to have lunch with Purdue's Matt Painter? Hire Minnesota's Goldy Gopher for a party? Go behind the scenes at Michigan State basketball game?  See them all on our contest page.

Also, have you seen our photos? Photos! Photos!