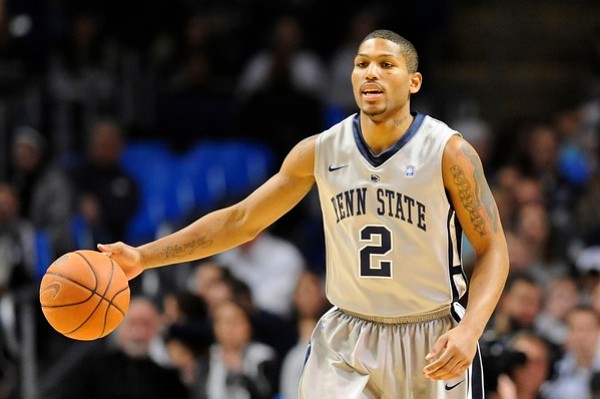 This has been a trying season for Penn State. You don?t have to remind D.J. Newbill who has overcome bigger things in his life, including a transfer and the loss of his mother. The 6-4 sophomore is doing his part to get the Nittany Lions on track. How tough has it been? Penn State is 0-10 in the Big Ten and 8-14 overall. Not having star point guard Tim Frazier has made matters challenging for Newbill and Penn State, as Frazier is out with a left Achilles tendon injury suffered just four games into the season.

Newbill is trying to pick up some of Frazier?s scoring slack after sitting out last season following his transfer from Southern Miss, where he started as a freshman and averaged 9.2 points and 6.2 rebounds en route to earning C-USA All-Freshman Team honors. Newbill averages a team-high 15.7 points while also pulling down 5.9 rebounds and 4.0 assists.

He impressed Penn State coach Pat Chambers so much while sitting out last year that Newbill was named a captain before playing a minute for the Nittany Lions.

I caught up with the Philadelphia native as he and Penn State were preparing to play at 11th-place Nebraska on Saturday in what will be one of the Nittany Lions? last good chances to earn a Big Ten triumph.

Q: How has your role changed upon Tim Frazier suffering that season-ending injury in November?
A: When we found out he was going to be out for the season with an Achilles? injury, Coach put me in as the primary point guard. It wasn?t totally strange for me, because in practice, we all change roles. But it has made my role on this team even that much more important. I have to be a leader, playing a lead-role position, handling the ball. I also have to be a vocal leader for the team, too.

Q: How is Frazier still helping the team despite not being able to play?
A: He contributes a lot. He?s not just sitting around, trying to get himself back up. He?s still into this team and is doing anything he can to help us. In practice, he?s with the guards, he?s running some of the drills that Coach lets him do. He?s pulling us together in huddles. Sometimes in getting ready for games in practices, Coach will let Tim coach a huddle. I watch film with him in individual film sessions. He shows me how he played teams last year, giving me pointers. His voice is always heard. He?s always cheering for us, doing all he can, kind of like a coach.

Q: How did you end up at Southern Miss coming out of Strawberry Mansion High in Philadelphia?
A: I originally committed to Marquette out of high school. I got out of my commitment, and it was early July and a lot of schools already had their 2010 commitments lined up. One of my former high school teammates was in JUCO at the time and Southern Miss was recruiting him. We were great friends, grew up in the same neighborhood. He was going to visit down there and I tagged along. We played some pick-up games and they offered us both a scholarship. We both committed.

Q: Then how did you come to Penn State?
A: Several reasons. I wanted to be back closer to home to be by my family. Me and my mom had a close relationship and she had only seen me play once when I was at Southern Miss. I didn?t like that. (Newbill?s mother passed away in September after a short battle with cancer.) There was a coaching change about to go on, so I was gonna transfer. I just didn?t like the direction of the program. That?s why I decided to come back by home.

Q: How are you dealing with the struggles of the team, which is 0-10 in the Big Ten? What would it mean to get that first Big Ten win this season?
A: It?s tough. For me and my teammates, we are competitors. We go out each game, no matter who we are playing, feeling like we are going to win. We feel like we are the hardest working team in the country. That?s how we feel. So, we feel like we deserve to get these wins. It?s not working out for us right now, but we are going to keep fighting. We aren?t gonna throw in the towel or fold. For us to get our first Big Ten win would relieve some of the pressure. It would be a big relief.

Q: Is Coach Pat Chambers as intense in practices as he is in games?
A: He has the same energy from the first practice of the year to now. He hasn?t changed a bit. He?s gonna bring it every day and give us his all to get us to be the best team we can be each and every day. He actually may be more fiery in practices than he is in games. But that?s his personality. He?s a high-energy guy. That?s good for us. We all want to win for him.

Here are Newbill's games to date for this season.