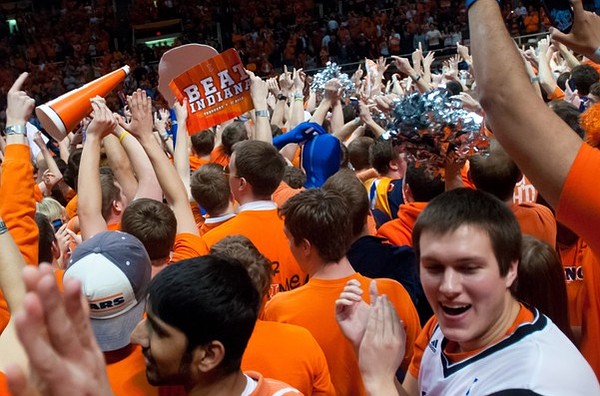 With one of the most improbable comebacks you'll see this season, Illinois shocked Indiana in Champaign. This was a game controlled by the Hoosiers most of the way, and Tom Crean's squad held an eight point lead with 3:01 remaining. At that point, KenPom's win probability, which factors in time, score, and team quality, gave the Illini just a 1.1 percent chance of coming back to win. With those teams, in that situation, you'd expect Indiana to win 99 out of 100 times.

Of course, this game was the one percent. Over those final three minutes, Illinois scored on every possession, and the Hoosiers managed only Victor Oladipo's go-ahead layup. It was a 12-2 run, capped by the most wide open shot you'll ever see a team get with 0.9 seconds remaining and the game on the line. Simply put, this was either an epic comeback or an epic collapse, depending on your perspective.

For all of Indiana's struggles to score down the stretch, the Hoosiers still finished with an efficiency of 1.14 points per possession, which will almost always be enough to win. Instead, it is Indiana's defense that is most responsible for this loss, as the 1.17 efficiency posted by Illinois is the highest the Hoosiers have surrendered all season. A look at Illinois' shot distribution shows that it was mostly a case of an opponent simply making jump shots, as Indiana was very good at limiting shots at the rim. The Illini shot 38 percent on jumpers, both threes and twos, and that kind of accuracy coupled with a low turnover rate is exactly how John Groce's team won Maui and upset Gonzaga. The careful ballhandling also kept the Indiana transition attack at bay, as the Hoosiers didn't score a single fast break point.

A huge part of that rediscovered accuracy was the play of Tyler Griffey, the senior forward who had missed 22 straight threes before his splash early in the second half. Griffey ended up scoring 14 points, none of them more important than his inexplicably wide open layup at the buzzer to complete the upset. Fellow seniors D.J. Richardson and Brandon Paul combined for 44 points on 29 shots.

Needless to say, this victory gives the Illini new life in a season that had looked done. Suddenly, a 7-11 record looks likely, with 8-10 within reach, and either would seemingly be enough to get Illinois into the tournament given their collection of big wins. It was a miracle game at the absolute best time for a struggling team.

For Indiana, this is a loss that the Hoosiers could regret come early March. Gone is any breathing room Indiana had in the Big Ten title race, as KenPom now projects both Indiana and Michigan to finish 14-4, with Michigan State, Ohio State, and Wisconsin all lurking. This race no longer has a single favorite.

On Wednesday, Iowa missed yet another opportunity for a big win, dropping a double overtime battle of attrition to Wisconsin. This one was a brickfest, as both teams failed to clear 40 percent effective field goal percentage. The loss stings even more for the Hawkeyes given how close they were to winning in regulation. After a furious run, Iowa held a nine point lead with six minutes remaining in regulation. At that point is where we usually hear how the Badgers, with their slow-paced offense, aren't built to come back, which has been proven wrong time and again. Sure enough, Wisconsin scored 16 points over the final 6 minutes to force overtime.

Jared Berggren put together a monster line of 16 points, 14 rebounds, and seven blocks. His defensive presence was a huge part of Iowa's 39 percent shooting on twos.

The Hawkeyes now enter the part of their schedule where they can really make some hay, and an 8-10 record is still well within reach. Given the perception of the conference, that might be enough to sneak into the tournament, but it should be said that Iowa has nowhere near the list of quality wins Illinois can boast, and opportunities are becoming fewer. Save for an unlikely win at Indiana, next Sunday's hosting of Minnesota will be the Hawkeyes' last opportunity to rack up a big-time win before the Big Ten tournament.

Wisconsin continues to win close games, and we could very well see another one this Saturday against Michigan. If the Badgers want to thrust themselves into the Big Ten title race, now is the time to do it (vs Michigan, at Minnesota, vs Ohio State).

This weekend brings a couple games that figure to impact the title race, including Wisconsin vs Michigan and Indiana at Ohio State.  After last night's upset, every game involving the top five is crucial, and we could somehow get yet another classic game from this monster of a conference. Enjoy the ride, folks.