Illinois knocks off No. 1 Indiana in dramatic fashion 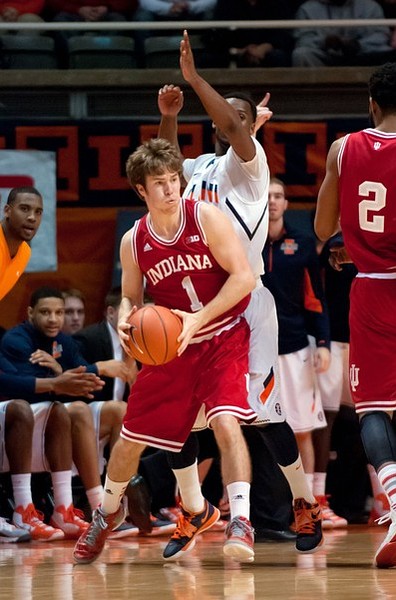 Tyler Griffey made an uncontested layup at the buzzer off a baseline inbounds pass and Illinois beat No. 1 Indiana 74-72 on Thursday night, the fifth straight week the nation's top-ranked team has lost.

Victor Oladipo to Will Sheehey, Sheehey to the rim vs. Illinois

Will Sheehey with the one-handed jam.

Brandon Paul with the dunk.

FINAL: Illinois went on a 15-3 run with 4:05 to go to seal its 74-72 upset victory over No. 1 Indiana on Thursday at Assembly Hall in Champaign. Tyler Griffey took an inbounds pass and scored as time expired. D.J. Richardson sparked Illinois (16-8), as he scored 23 points and shot 8-of-15 from the field for the Fighting Illini in the game. Illinois also got double-digit contributions from Griffey (14 points) and Brandon Paul (21 points).

Cody Zeller was a bright spot for Indiana (20-3) in the loss with 14 points, nine rebounds, and 4-of-6 shooting from the field. Jordan Hulls shot 3-of-5 from the field and scored 11 points for the Hoosiers. Indiana shot 50 percent from the field (25-of-50). The Hoosiers shot 9-of-17 from three-point range during the game, good for 53 percent. Indiana also got double-digit efforts from Christian Watford (12 points) and Will Sheehey (13 points). Leading 24-21 with 5:43 to go in the first half, the Hoosiers used a 15-4 spurt to open their cushion to 14 points late in the first. Sheehey finished the run off with a field goal, which helped Indiana lead 41-29 at halftime. With the loss, Indiana's five-game winning streak came to an end.

HALFTIME: Cody Zeller has eight points and four rebounds as No. 1 Indiana holds a 41-29 lead over Illinois after 20 minutes. After giving up eight offensive rebounds to the Fighting Illini, the Hoosiers will have to keep Illinois off the boards in the second half. Still, Indiana shot 5-of-8 from beyond the arc in the first half (63 percent). Indiana's Will Sheehey leads all scores with 10 points. The Fighting Illini's Tyler Griffey had four points and three rebounds.