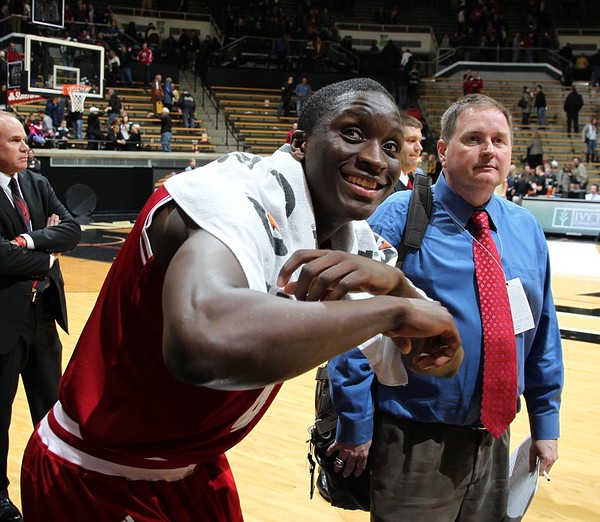 Yes, the object in basketball is score. You need athletes, shooters, passers and rebounders. But good teams also possess toughness.

You don?t have to be 6-10, 250 pounds to be tough. Nope, toughness comes in many shapes and sizes. I think back to some past Big Ten players who embodied what I felt was true toughness-players like Ohio State?s Chris Jent, Michigan?s Steve Grote, Michigan State?s Mateen Cleaves, Iowa?s Jess Settles and Purdue?s Jim Rowinski-among others. Those guys were bulldogs who gave no quarter while on the floor, true warriors.

But the players who netted the most were Oladipo and Mbakwe, who each were the pick of three writers. As you can see from anonymous comments from the nine panelists, there was ?tough? love for others.

Purdue writer: I like Craft, Oladipo or anyone on Michigan State. But I?ll go with Oladipo.

Indiana writer No. 1: (I vote for) Mbakwe, but can I give an honorable mention vote to Will Sheehey?

Indiana writer No. 2: Victor Oladipo. He combines mental and physical toughness with the demands made on offense and defense each game. And his level and consistency in assignments is an accomplishment.

Iowa writer: That?s a good one. Lots of people will say (Aaron) Craft. I think Victor Oladipo is. Tough, tough defender on top of everything else.

Michigan State writer: I guess I?ll go Mbakwe, but Craft, Burke, Appling, Oladipo are all right there for me.

Minnesota writer: That?s probably a question that can be taken a bunch of different ways ? toughest physically, mentally, toughest to guard, etc. But I think I?m going to go with Will Sheehey, Indiana.

Michigan writer: My vote goes to Trevor Mbakwe. What a warrior.

Now it's your turn. Who do you say is the toughest player on a Big Ten team this season?