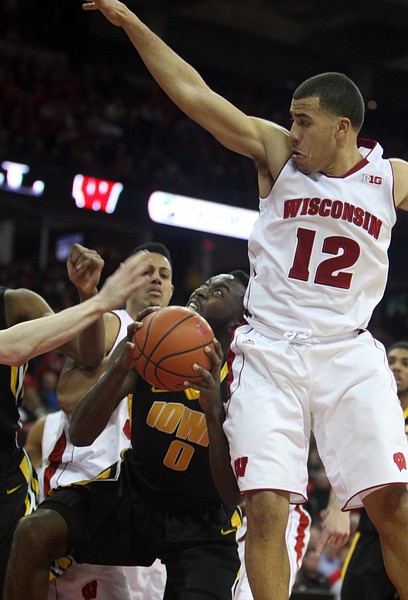 Wisconsin, which has shot less than 62 percent from the foul line this season, converted 13 of 14 free throws in the two overtime periods.

Aaron White gets And-1:

Gabriel Olaseni gets late jam in first half:

Eric May throws down alley-oop:

FINAL: Wisconsin trailed in the waning moments of Wednesday's game, but took the lead for good on a field goal by Sam Dekker with with 1:35 remaining in overtime and hung on for a 74-70 in double-overtime triumph over Iowa at the Kohl Center in Madison. Jared Berggren contributed 16 points and yanked down 15 rebounds and Ryan Evans had 15 points, nine rebounds and five assists for Wisconsin, which snapped a three-game losing streak to Iowa. Iowa (14-9) shot 34 percent from the field (25-of-74) and hit free throws at a 68 percent clip (15-of-22). The Badgers, who shot just 34 percent (24-of-71) from the field, also got solid contributions from Traevon Jackson (13 points) and Ben Brust (18 points).

First overtime game of the season for UW… last OT game was a 68-61 win at Minnesota last season.

Mr. Big Shot. Traevon Jackson pulls up and hits a 3-pointer with 20.5 seconds left. #badgers and #hawkeyes tied at 58.

Just another night in college hoops where Iowa-Wisconsin, Stanford-Arizona and TCU-KU all coming down to the wire.

Ben Brust really maneuvers himself inside the trees. No idea how he found that rebound.

Brust's 3 and Berggren's 3-pt play on back-2-back possessions matched the number of points Wisconsin had scored in the previous 11:38.

UW is averaging 0.48 points per possession since McCaffery's technical foul in the 1st half.

If Iowa could just play Wisconsin every game they would be a Top 5 team.

Iowa has Wisconsin figured out like no other Big Ten team. Beating the Badgers on the boards, and in transition.

Does it seem like Wisconsin doesn't play Wisconsin basketball against Iowa?

He fouls too much now, but Woodbury is going to be a defensive force soon.

I think Bo Ryan is more unlikable than was Bobby Knight

HALFTIME: Iowa went on a 12-3 run to close the gap late in the first half and now only trails Wisconsin 31-29 at halftime. The Hawkeyes applied the pressure in the first half, earning second-chance opportunities with 10 offensive rebounds, to just six for the Badgers. Iowa shared the ball, finishing with nine assists on 11 field goals in the first half. Wisconsin's Ryan Evans and Ben Brust lead all scorers with eight points apiece, while Traevon Jackson added six. Melsahn Basabe led the way for the Hawkeyes in the first half, with six points and four rebounds.

Iowa's two leading scorers, Marble and White, have combined for 2 points. And Iowa only trails, 31-29.

Solid run by the #Hawkeyes to end the half. Bench stepped up big

Josh Oglesby checks in for the #Hawkeyes. No, not that Josh Oglesby, #Badgers fans.

Lesson for Ben Brust and Sam Dekker: Don't screw up a 2-on-1 break. #badgers

It goes without saying that Roy Devyn Marble has to get it going. #Hawkeyes #MIA

Ben Brust is among the most improved players in the Big Ten. He's much more than a 3-point shooter. Huge growth on defense too. #Badgers