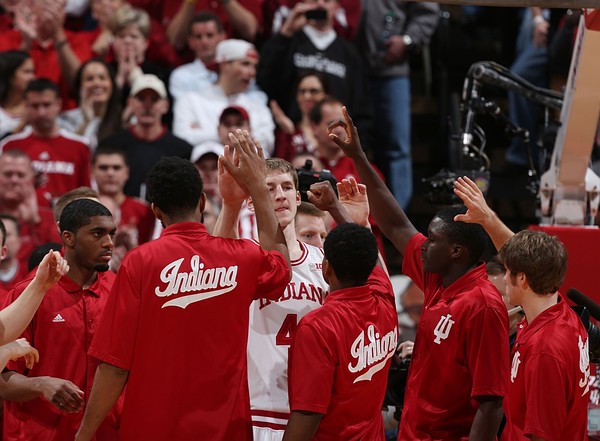 The Big Ten is still abuzz over the battle between No. 1 Michigan and No. 3 Indiana. The Hoosiers impressed in victory. And a big reason for the win was freshman point man Yogi Ferrell. The kid is proving to be every bit as special as anticipated. Terry Hutchens of the Indianapolis Star points out that Ferrell nailed a few early three-pointers and played good defense on Wolverines star Trey Burke-among other things. If Ferrell keeps it up, the Hoosiers will be very deadly in March, when guard play matters even more.

Nick Baumgardner of MLive.com wonders if Michigan is the real deal. Well, with the toughest portion of the schedule on tap, we are about to find out. What?s ahead? Ohio State, at Wisconsin, at Michigan State.

"It's a heck of a stretch," Michigan coach John Beilein said. "That's for sure."

And if Michigan is going to rebound and contend for a national title, its youngsters need to grow up-fast-says Drew Sharp of the Detroit Free-Press.

Sharp has it figured out: The word is out on the Wolverines. They're explosive when allowed to run free with impunity. But Indiana and Ohio State resolved that physicality was the best option. It's not a coincidence that those resulted in Michigan's only losses.
So, get physical with the Wolverines if you want to beat them.

Remember that Victor Oladipo dunk at the end of the Michigan at Indiana game? You know, the dunk that rankled many Wolverines who didn?t think it was necessary? Well, he has apologized.

"No disrespect to Michigan," Oladipo said. "I apologize for that. I apologize to their players and coaching staff."

That?s all well and good. But, I?m guessing the Wolverines still won?t forget.

No team has a bigger week than Ohio State, which has games on tap with Michigan and Indiana. How good are the Buckeyes? Contender or Pretender? This week will tell us all we need to know, I think.

Yes, Minnesota picked up a second win a succession by downing Iowa yesterday but the new-look Gophers offense took a step back in the process as it wasn?t nearly as up-tempo as it was in a win the last time out vs. Nebraska.

But, in the end, one of the plays did work. And, it was a big one, as Austin Hollins drained a go-ahead three-pointer with 11.6 seconds left to propel Minnesota to a 62-59 triumph.

Meanwhile, Bryce Miller of HawkCentral.com says bitter defeats are the narrative for Iowa. And the loss at Minnesota falls into that category.

Put this loss on the pile with gut-wrenching defeats against Michigan State, Indiana and Purdue. It was a game the Hawkeyes could have won, and needed to win. Now, Miller feels the team?s best shot at navigating a kinder, gentler portion of the Big Ten schedule and creating an NCAA Tournament case likely vanished.
Ouch.

Well, Illinois lost a fourth game in a row at home yesterday, falling to Wisconsin. If Fighting Illini fans are looking for answers, don?t ask Loren Tate of the Champaign News-Gazette. He?s out of them. Me, too.

As Tate points out, the Illinois team that paced America in three-pointers in December is shooting 26.1 percent in Big Ten action. And the defense? It has been soft, as Illinois has yielded 37 layups and dunks in the last two games. This season is looking more and more like last season, when the Illini started 15-3 and finished on a 2-14 funk. This year, Illinois began 13-1 and has now lost six of its last eight. Let?s all say it together: ?Circling the drain.?

With Signing Day drawing near, Penn State?s biggest needs are identified by Bob Flounders of the Harrisburg Patriot-News.

The good news is Need No. 1 will be filled by Christian Hackenberg, one of the top signal-callers in the nation. And JC transfer Tyler Ferguson already is on campus. Sophomore Steven Bench also remains.

My take: Well, you have to cast a wide net when you are at Nebraska.

Gophers look so much more disjointed offensively than early this season.

My take: Yes, it?s a great mystery. But I have to think better competition is part of the reason for the Gophers? struggles.

With two losses this week, #hawkeyes now have to start worrying about staying solid for the NCAA Tournament.

My take: Yes, lots of work to do for Iowa.

Tough loss for Iowa at Minnesota. That would have put the Hawks in position for NCAA berth. Only six B1G teams in good position for berth

My take: Bet you didn?t know this.

My take: LOL. That?s all I have to say about that.