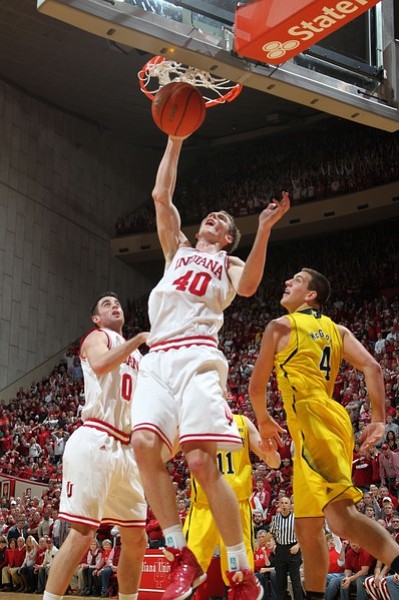 Indiana reclaimed the top spot in the polls after it held off Michigan in Bloomington. The Hoosiers lit up the Wolverines? defense to the tune of 1.17 points per possession, the highest mark allowed so far this season by John Beilein?s team. And the reality it that it could have been much worse, as careless turnovers were about the only thing that slowed down the IU offense.

Michigan had the opposite problem-while it took care of the ball by only committing 8 turnovers in a 69 possession game, the Wolverines were atypically inaccurate on both twos (49 percent) and threes (30 percent). Still, the value UM placed on possessions enabled it to score 1.06 points per possession on the Hoosiers at Assembly Hall. Not bad.

Cody Zeller was the player of the game, netting 19 points on 10 shots, but I think his defense might have been even better. The big man grabbed six defensive rebounds, blocked two shots, and fouled exactly no one in 34 minutes on the floor. Last season, Zeller was probably a lower half defender as compared to other post players in the Big Ten. No more. The sophomore took a defensive leap similar to what we saw from Jared Sullinger last season, and he?s now firmly among the best in the conference.

That?s quite significant, as Indiana (as well as Michigan), will only go as far this season as its defense will allow. Both teams feature elite offenses, and defenses somewhere in the range of ?pretty good.? It?s likely that at some point in the NCAA Tournament, they?ll run into a Louisville, Miami, or a Kansas-a team with a devastating defense. When that happens, these teams won?t simply be able to run opponents out of the gym, as they?re accustomed to doing.

The rematch between Indiana and Michigan comes on the final day of the regular season in Ann Arbor, however, I have a feeling that won?t be the last time we see these two squads go at it.

Iowa lost an opportunity to pick up a huge road win when it left Austin Hollins open for the go-ahead three-pointer with 11 seconds remaining. Mike Gesell was unable to answer on the other end, and the Gophers escaped with the three-point win. Hollins led the way with 17 points on 12 shots, as Minnesota managed to score over a point per possession despite turnover problems and cold outside shooting. But the Gophers managed to clean up over 40 percent of their misses and get to the free throw line.

But although Minnesota won, I?m still not quite buying this team as one that?s quite as good as its pretty Pomeroy rating. Quite frankly, Tubby?s team continues to give up offensive rebounds (Iowa captured 44 percent of its misses), which has really dragged down the defense. But there is one encouraging bit of news-Iowa shot just 40 percent on two-pointers. The reason that?s some cause for mild celebration is the fact that Minnesota?s defense came into this game as the 4th-most permissive inside the three-point line. Mind you, I?m fully in the camp that believes this is something of an anomaly, as the Gophers also rank as the best shotblocking team in the Big Ten. Basically, opponents had been making over 58 percent of their unblocked shots inside the arc, and quite frankly I don?t think that?s a sustainable number. Still, while Minnesota is undoubtedly a Tournament team that will likely earn a protected seed, I?m not sure that the defense will allow it to be better than a 10-win team in the Big Ten.

Iowa drops to 3-6, and that could easily be 3-7 after the Hawkeyes visit Wisconsin on Super Wednesday. The task for Fran McCaffrey will be keeping his team?s spirits high at that point, because Iowa has a schedule that allows it to finish strong. After Wisconsin, Iowa has just two games remaining against teams that currently stand at .500 or better in conference play-a home game against the Gophers, and a visit to Indiana. It wouldn?t be a huge shock to see Iowa finishing the regular season on a 7-1 ?tear,? thanks to the unbalanced schedule.

In other action from the weekend, Northwestern obliterated Purdue in Evanston. Reggie Hearn?s career high 26 points led the Wildcat attack, which amassed 1.25 points per possession. NU just carved up the Boilermakers, hitting 65 percent of its twos. When the team wasn?t getting backdoor layups, it was making it rain from three (11 for 26).

While the Wildcats were probably a slight favorite coming into this game, the margin makes this an impressive victory. This year?s Northwestern team has been more than a little inconsistent this season-balancing out impressive wins over Minnesota and at Baylor with bad losses to Illinois-Chicago and at Nebraska-but that?s probably to be expected for a team that relies on so many freshmen. However, that?s also a reason to be excited about the future in Evanston. Sure, the Wildcats will lose Hearn and a couple other contributing seniors, but if they?re able to welcome Drew Crawford and Jershonn Cobb back next season, we could finally see the end of the NCAA Tournament drought. I know it?s been somewhat of a February tradition for writers to suggest that this is the year the Wildcats will be invited to the Dance, but I really don?t see why next year should not be the year. So you heard it here first-the drought ends in 2014.

Also on Saturday, Ohio State picked up a road win at Nebraska, setting up a three-way tie for second place in the conference standings. As has been the case this season, OSU?s opponent failed to hit a point per possession (Illinois is the only Big Ten team to meet that particular threshold this season). Lenzelle Smith Jr. carried the water for the Buckeyes on offense (21 points, 11 shots), as the Huskers failed to capitalize on a rare off night for Deshaun Thomas. Ohio State will try and move past Michigan when it visits the Crisler Center on Tuesday.

Finally, Wisconsin diced up Illinois to hand the Illini its fourth consecutive home loss. For Illinois, the good news is that they only lost by six. The bad news is that this game really wasn?t that close, with the Badgers holding a 15-point lead with about four minutes to play. The teams were pretty much identical statistically, with the exception that Wisconsin attempted 42 free throws to Illinois? 15. Credit UW for creating so many mismatches off of ball screen action, as Illinois? guards often found themselves trying to check the likes of Frank Kaminsky (who finished with 19 points, largely thanks to his 14 free throw attempts).

Wisconsin moves to 6-3 in conference play, and yes, it turns out that all those fears about Bo Ryan?s team were largely unfounded. In hindsight, it?s easy to see how just about any team would get the doors blown off by Florida in Gainesville. Illinois meanwhile continues its two-year tailspin, and judging from the amount of seniors on the roster, it will get worse before it gets better. Also, Indiana visits Champaign in Thursday, so now might be a good time for Illini fans to find some new hobbies. I hear Downton Abbey?s good.