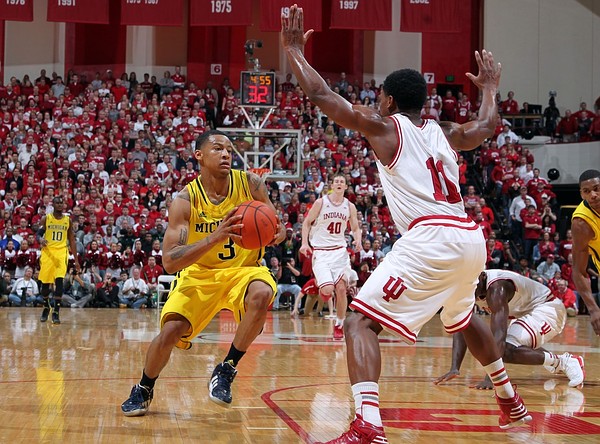 We're approximately at the midway point of the conference schedule, so it's a logical time to check in our preseason predictions. Were we close?

First, let's look at the records we predicted against the current KenPom projections for final records:

Not bad. Obviously, the final records won't line up exactly with the current KenPom projections, but they also figure not to be wildly different. We were within one game on all but four teams: Michigan, Illinois, Penn State, and Nebraska. Let's break down how each of these teams has defied our expectations.

The Wolverines were a hot topic of discussion amongst preseason prognosticators, as most data-based projection systems didn't support the Wolverines' preseason #5 ranking. We were no different–we saw a team that lost a fair amount of minutes after posting a good-but-not-great efficiency margin in conference play, and we expected that the freshmen, while talented, wouldn't be able to immediately replicate the efficiency of the departed players. Well, we were wrong. Glenn Robinson III, Nick Stauskas, and Mitch McGary have all been off-the-charts good for freshmen, even given their solid RSCI rankings. Tim Hardaway Jr. has recovered from his sophomore shooting slump in a big way, and Trey Burke is arguably putting up the best statistics in the nation. We were flat out wrong when it comes to Michigan, and we really should have known that John Beilein would get the most out of his freshmen–he always does.

The Illini were a team for which our prediction varied greatly from the media's preseason conference poll. We predicted that Illinois would finish 9-9 and in seventh place in John Groce's debut season, while the B1G media expected another season of struggle leading to a ninth place finish, narrowly ahead of 10th place Northwestern. So what has Illinois done worse than we expected? In a word: defense. Under Bruce Weber, Illinois basically always played good defense, regardless of any other turmoil occurring on or off the court.

That has changed drastically this season. The Illini are miserable in nearly every defensive measure, save for the Pyrrhic victory of ranking second in the B1G in forcing turnovers. Simply put, a successful Big Ten defense cannot be built on forcing turnovers, as conference opponents are simply too careful with the ball for that method to make up for deficiencies elsewhere. Illinois ranks ninth or worse in defensive rebounding percentage, defensive effective field goal percentage, and defensive free throw rate. This Illinois defense is a mess, and even a hot shooting night from three can take this team so far. The Illini seem certain to miss the NCAA tournament, making them our biggest preseason miss.

Penn State
We expected the Nittany Lions to struggle without Tim Frazier, but this team is challenging 2008-09 Indiana levels of awfulness. Given that those Hoosiers were completely blown up prior to playing that season, this fact doesn't speak well to the rebuilding job Pat Chambers is doing.  Still, things should get appreciably better next season, assuming Frazier is able to return to full health. Most of the roster will return, and Pitt transfer John Johnson, a promising combo guard, will be available in mid-December. If Chambers thought he had the best backcourt in the nation coming into this season, he should be giddy when he's able to add Johnson to Frazier and D.J. Newbill. For now, that's small consolation for a miserable campaign that could conceivably end in an 0-18 conference record.
Nebraska
Before the season, it was Nebraska, not Penn State, that was drawing our comparison to blown-up 2008-09 Indiana. After all, the Huskers returned only Dylan Talley and Brandon Ubel from last season's disaster, and none of the incoming recruits looked to be of the instant-impact variety. What we didn't count on was the transformation of Ray Gallegos. The redshirt junior returned from a year of development a different player, and he's been an absolute rock in the Nebraska lineup. On top of that, Tim Miles has been able to make his mark on this team's defense, as he already has the Huskers hitting the defensive glass hard. All of that said, this is still a bad basketball team, and the rebuild isn't going to be quick and easy. But, credit where credit is due–Nebraska is better than we expected.