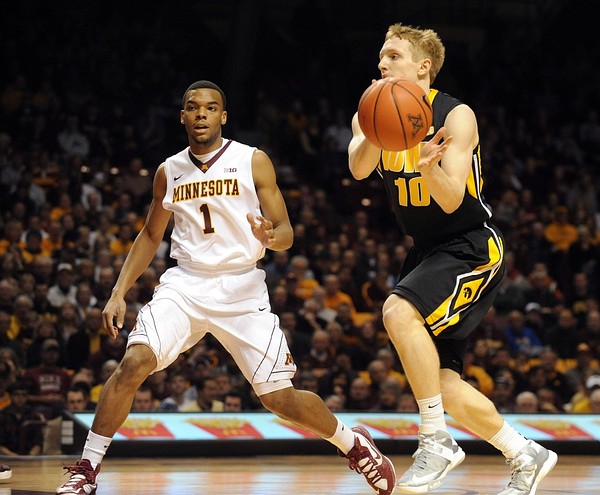 With Minnesota trailing 59-57, the 6-foot-4 Hollins came off a screen to get open in the corner on an inbounds play and made the shot over 6-foot-1 Mike Gesell. Hollins then hounded Gesell in the corner on the other end to force the ball out of bounds.

Andre Hollins, who had 15 points, made two free throws to stretch the lead to three, and Gesell's tying attempt rolled off the front rim.

Aaron White gets big-time And-1:

Aaron White goes for the steal and slam:

Aaron White hammers one down:

FINAL: No. 23 Minnesota trailed in the waning moments of Sunday's game, but took the lead for good on an Austin Hollins 3-pointer with 11 seconds remaining and hung on for a 62-59 triumph over Iowa at Williams Arena. Andre Hollins helped lead Minnesota (17-5) to victory, with 15 points, seven rebounds, and eight assists. Iowa (14-8) struggled shooting the ball in the game, going 59 percent (10-of-17) from the charity stripe and 36 percent (21-of-59) from the field. Joe Coleman was 6-of-7 from the floor and chipped in 12 points for Minnesota. The Golden Gophers, who tallied 16 assists on 22 baskets, received double-digit performances from Hollins (17 points) and Rodney Williams Jr. (10). Mike Gesell scored 11 points, grabbed eight rebounds, and contributed three assists for Iowa in a losing effort

My Lord, the Hawkeyes just cannot catch a break. This will all make them much better in '13-14, but that feels like a LONG time from now

Austin Hollins for president. Who's with us? #Gophers

Is it hyperbole to call that the biggest basket of Eric May's career? I guess we'll see in 2:10.

I can't believe Tubby Smith has this talented of a team and might blow a chance at making the NCAA Tournament. Wait, yes I can. #Minnesota

Iowa began this game a step slow and soft. That's gone now. Totally diff team and mindset with 5 min to go up two

Really seems like Mbakwe's having hard time holding on to the ball. He should have had the rebound but Woodbury ends up with it and calls TO

#Gophers fans chanting "Rubio! Rubio" at @rickyrubio9, who is at today's game.

In the last two seasons, the #Gophers have won only two games in the month of February, combined for a 2-13 record.

That was a big-time rebound by White. And the "Who hates Iowa? We hate Iowa!" chant starts from the student section.

Iowa takes its first lead of the game, 32-31, early in the second half. #Gophers

HALFTIME: Austin Hollins has 11 points and four rebounds to lead No. 23 Minnesota to a 29-28 halftime lead over Iowa. Things could be worse for the Hawkeyes as the Golden Gophers led by as many as 12 with 15:09 left in the first half. Iowa put the clamps on Minnesota's three-point game (1-of-8, 13 percent from long range), while the Golden Gophers shot 59 percent in the first half on two-point field goals. The Hawkeyes, who shot 33 percent, recorded an assist on all 10 of their buckets. They also grabbed 13 rebounds, compared to eight for Minnesota. The Hawkeyes' Zach McCabe already has seven points.

#Hawkeyes staying in this game with some made threes. Made 5 in 1st half vs #Gophers minny has to keep attacking

Good to see Josh shooting the ball today. Your shooters have to shoot.

Woodbury playing like a freshman for the past…month. Can't do that.

Devyn Marble, Aaron White, Rodney Williams and Trevor Mbakwe are all scoreless 12-plus into this one on @BigTenNetwork.

Said it all year, so much respect for the fight this Iowa team has. Plays ugly a lot, but very rarely lack of effort.

Iowa down 14-2 to start game v MN. It's a shovel your drive Sunday already.

Iowa offense is not good. Not as bad as football but pretty bad.

Good start for the #Gophers, who are scoring in a lot of different ways right now. Up 11-2 early.

Iowa struggling to get in a rhythm. Olaseni and May and McCabe in

Iowa's entire starting 5 could be back next season. That team has a lot of potential. But how good are the Hawks right now? True test here.

Spotted Blake Hoffarber and Jamal Abu-Shamala in the hallway. So the #Gophers shouldn't have a problem with outside shooting today vs. Iowa.