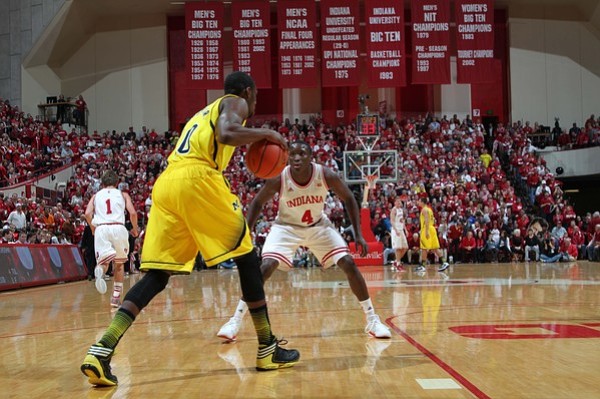 Indiana beat the nation's No. 1 team Saturday night and is now in position to reclaim the top spot. Cody Zeller scored 19 points and Victor Oladipo had 15, leading the No. 3 Hoosiers to an 81-73 victory over top-ranked Michigan.

It's the third time in school history that the Hoosiers (19-2, 8-1 Big Ten) have beaten the No. 1 team at home, and the first time they've done it in back-to-back seasons.

The win gives Indiana a five-game winning streak, sole possession of the Big Ten lead and likely the top spot in the country again when Monday's rankings come out. In addition to Michigan's defeat, No. 2 Kansas lost 85-80 to Oklahoma State.

Victor Oladipo missed the dunk, but it was still highlight worthy:

Cody Zeller gets yet another putback:

Trey Burke gets the steal and slam:

FINAL: Cody Zeller scored 19 points and grabbed nine rebounds and Christian Watford added 14 points and 10 boards to lead No. 3 Indiana to an 83-73 victory over No. 1 Michigan on Saturday at Assembly Hall in Bloomington. Indiana (20-2) shot 53 percent from the field (27-of-51), including 88 percent from the free-throw line (22-of-25). Jordan Hulls was 3-of-5 from the floor and chipped in 11 points for the Hoosiers, who also got double-digit games from Kevin Ferrell (14 points) and Victor Oladipo (17 points). Trey Burke contributed 25 points, grabbed five rebounds, and had eight assists for Michigan (20-2) in the loss. Mitch McGary shot 5-of-7 from the field and scored 10 points for the Wolverines.

HALFTIME: Cody Zeller scored 11 points and grabbed six rebounds and Christian Watford added five points and six rebounds to help lead No. 3 Indiana to a 36-32 halftime lead over No. 1 Michigan. The Hoosiers, who led by as many as 15 points, shot 56 percent, including 50 percent from downtown (5-of-10). Michigan, however, hit only two of its 12 treys (18 percent). Michigan's Trey Burke led all scorers with 14 points. He also hit a buzzer-beating 3-pointer to cut the deficit to four. Talented freshman Glenn Robinson III was held scoreless.