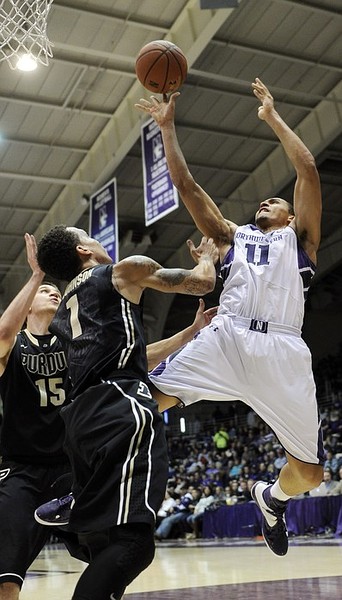 Reggie Hearn scored a career-high 26 points to lead Northwestern to a 75-60 victory over Purdue on Saturday. Jared Swopshire and Dave Sobolewski each added 13 points for the Wildcats (13-10, 4-6 Big Ten), who snapped a four-game losing streak to the Boilermakers.

Purdue freshman center A.J. Hammons didn't start because he was late for the team bus from West Lafayette, Ind., according to a team spokesman. Hammons did lead the Boilermakers (11-11, 4-5) with 19 points and 13 rebounds.

Travis Carroll started in Hammons' place, and Hammons entered with 16:44 to play in the first half. The Boilermakers scored their first points with 15:59 left on a Hammons tip-in to cut the lead to 12-2.

Ever see a 7-point possession? Here's one:

FINAL: Reggie Hearn scored 26 points and grabbed five rebounds and Jared Swopshire added 13 points and seven boards to lead Northwestern to a 75-60 victory over Purdue on Saturday at Welsh-Ryan Arena in Evanston. The Wildcats (13-10), who jumped out to a 12-0 lead and never looked back, shot 53 percent from the field (26-of-49), including 42 percent from distance (11-of-26) More Northwestern scoring came from Dave Sobolewski (13 points) and Tre Demps (12). A.J. Hammons contributed 19 points, hauled in 14 rebounds, and had three assists for Purdue (11-11) in the loss. The Boilermakers shot just 33 percent from the field (23-of-69).

HALFTIME: Reggie Hearn went 9-of-10 from the field and scored 21 points to lead Northwestern to a 43-29 halftime lead over visiting Purdue. Dave Sobolewski is putting together a strong game, as well, with eight points and five assists. The Wildcats led 33-26 before going on a 10-3 run to close the half. Northwestern, which jumped out to a 12-0 lead, hasn't trailed in the game and led by as many as 15 points. Northwestern shot 68 percent from the field, including 67 percent from downtown (8-of-12), and registered an assist on 14 of its 17 buckets. A.J. Hammons, who didn't start after being late for the team bus, scored 11 points and grabbed six rebounds to lead Purdue.