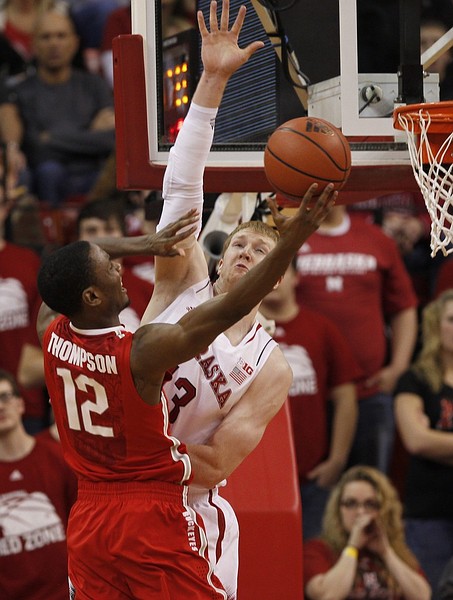 Following an Ohio State miss, Nebraska's Brandon Ubel and Andre Almeida each missed shots at the rim and Ubel missed a 3-point attempt. Craft hit a pair of free throws with 56 seconds left to put the Buckeyes up seven.

FINAL: Lenzelle Smith Jr. scored 21 points and Aaron Craft added 14 points and six boards to lead No. 11 Ohio State to a 63-56 victory over Nebraska on Saturday at Bob Devaney Sports Center in Lincoln. Smith Jr. was perfect from the field, going 6-of-6 from the field, including three treys. The Buckeyes were able to carry momentum into the break and sustain it to start the second half. Ohio State trailed 19-17 with 5:39 to go in the first half, but went on a 17-4 run over the next 5:52 to take an 11-point lead. Ohio State, which went 23-of-28 from the charity stripe, also got a double-digit performance from Deshaun Thomas (15 points). David Rivers scored 13 points, yanked down six rebounds, and knocked down 5-of-7 shot attempts for Nebraska (11-12)

HALFTIME: No. 11 Ohio State has a 32-23 lead over Nebraska at the half after dominating on the glass, outrebounding the Cornhuskers 21-15. The Buckeyes trailed 19-17 when they broke out for a 13-0 run to overtake Nebraska. Deshaun Thomas and Lenzelle Smith Jr. each scored eight points to pace the Buckeyes, while Shavon Shields and Ray Gallegos both tallied six points to lead the Huskers. Ohio State, which racked up six assists on 10 baskets, hit all 10 of its free throws. Nebraska didn't attempt a single free throw in the first 20 minutes.