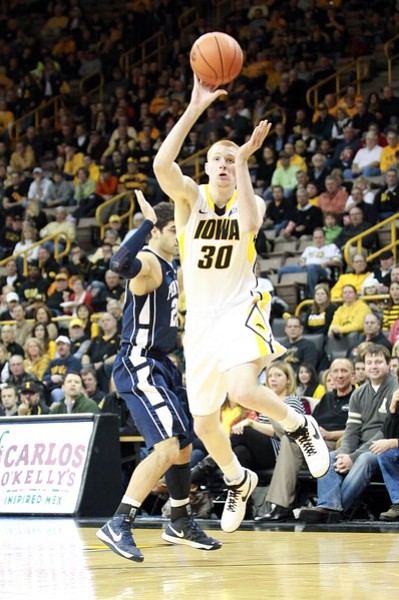 Aaron White had a career-high 27 points and Iowa beat Penn State 76-67 Thursday night, snapping a two-game losing streak. Melsahn Basabe had 10 points and 10 rebounds in his first start of the season for the Hawkeyes (14-7, 3-5 Big Ten), who hit 31 free throws in 39 tries.

FINAL: Aaron White scored 27 points and grabbed five rebounds to lead Iowa to a 76-67 win over Penn State on Thursday at Carver-Hawkeye Arena in Iowa City. Iowa (14-7) shot 31-of-39 from the free throw line.

The Hawkeyes had 15 assists on 20 baskets. Iowa grabbed 19 offensive rebounds. D.J. Newbill had 20 points, hauled in six rebounds, and handed out three assists for Penn State (8-13) in the game. Sasa Borovnjak shot 3-of-5 from the field and scored seven points for the Nittany Lions. Penn State also got a solid contribution from Jermaine Marshall (15 points).

The Hawkeyes won the rebounding battle en route to victory, pulling down 43 boards to 31 for the Nittany Lions. The loss extends Penn State's losing streak to nine games.

HALFTIME: Iowa is dominating the rebounding battle so far, with a 22-14 margin, and the Hawkeyes have a 34-26 lead over Penn State.Iowa has the lead at halftime due in large part to its ability to get to the foul line. The Hawkeyes shot 10-of-13 free throws in the first 20 minutes. Trailing 10-3, Iowa used a 14-0 run to blow past the Nittany Lions and take a seven-point lead. Iowa goes into the break with the offensive rebounding advantage, with nine to Penn State's three. The Hawkeyes distributed the ball well, with nine assists on 11 field goals in the first half. Iowa got points from eight different players. Iowa's Aaron White already has 14 points. The Nittany Lions' Jermaine Marshall had a big first half, with 10 points.