Michigan State rallies in second half 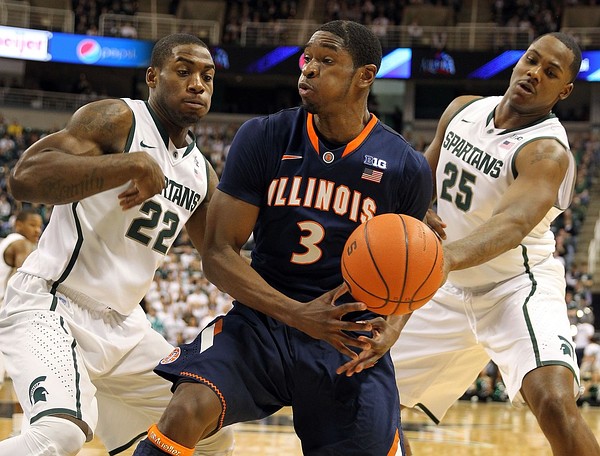 Keith Appling led a pivotal run early in the second half and finished with 24 points and seven assists to help No. 13 Michigan State beat Illinois 80-75 on Thursday night. The Spartans (18-4, 7-2 Big Ten) scored the first 14 points of the second half to take their first lead.

The Fighting Illini (15-7, 2-6) lost for the fifth time in six games. They had a chance to be the first team with four wins over currently ranked teams. Catch up on all the action on our Big Ten scoreboard and get video, stats and recaps in this post.

Adreian Payne crushes one vs. Illinois

FINAL:  Keith Appling scored 24, grabbed seven rebounds and handed out seven assists to help No. 13 Michigan State past Illinois 80-75 on Thursday at the Jack Breslin Student Events Center in East Lansing. Appling and Branden Dawson both had good games for Michigan State (18-4). Appling made 7-of-12 shots from the floor. Dawson had 12 points, corralled 10 rebounds, and went 4-of-5 from the field. When the second frame got underway, the Spartans took control of the game. Down 37-27 early in the second half, Michigan State broke out for a 24-6 run to take an eight-point lead in the middle of the second half. Gary Harris' field goal gave the Spartans a eight-point lead midway through the second half, but they nearly threw that advantage away. Michigan State hit 60 percent of its field goals (25-of-42).

HALFTIME: Illinois closed the first half strong, using a 7-0 run late in the frame to take a 37-27 lead over No. 13 Michigan State into the locker room. The Fighting Illini led by as many as 10 points in the first half and never trailed. Eight Illinois players have scored. Adreian Payne led the way for the Spartans in the first half, with five points and five rebounds. Illinois' Myke Henry already has eight points.