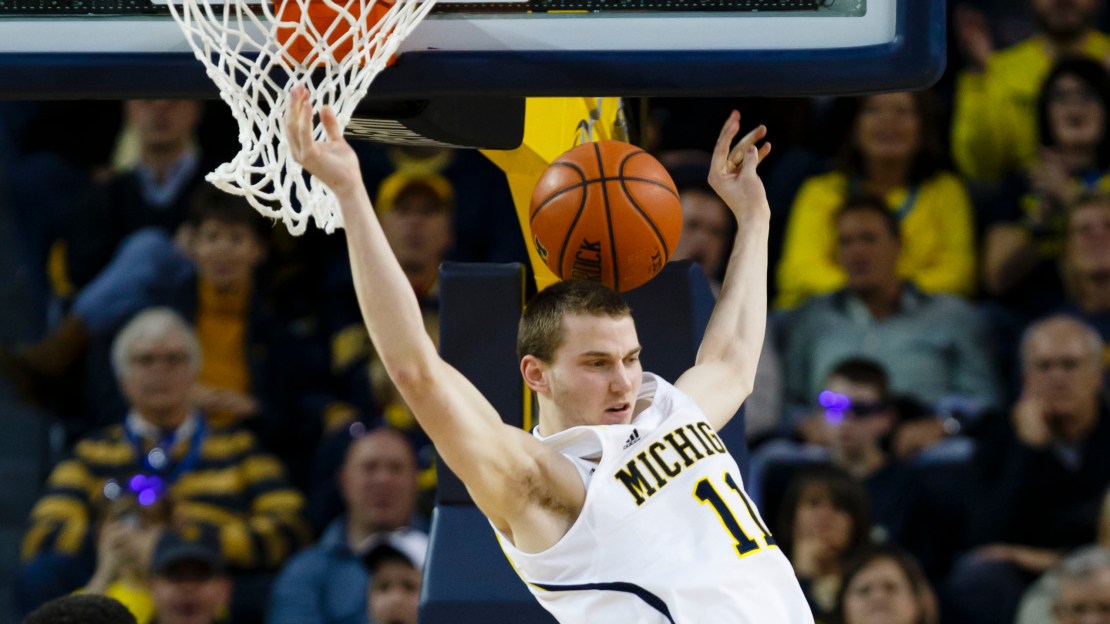 No. 1 Michigan took care of business in emphatic fashion vs. Northwestern last night to become the first Big Ten team to the 20-win mark. So, I?m gonna start daily links there, OK? Not impressed by the Wolverines? thumping of the Wildcats? Well, you had to be wowed by how No. 3 Indiana destroyed Purdue by 37 points, giving the Boilermakers their worst home loss ? ever.

That sets up a titanic showdown on Saturday night between the Wolverines and Hoosiers in Bloomington. Let the hype begin, says Bob Kravitz of the Indianapolis Star.

Will Michigan have the services of big man Jordan Morgan vs. IU? Will it matter, with the way the Wolverines are playing and with the production they are getting from Jon Horford and Mitch McGary? Oh, and tto repeat: Trey Burke and Glenn Robinson III are really good.

Let's have a look at some other news …

If Purdue fans are looking for a bright spot in the debacle, look no further than freshman big man A.J. Hammons, who scored half of the Boilermakers? points (30).

In some respects, that?s a good news, bad news, observation-if you know what I mean.

Illinois has been practicing well since that emphatic loss to Michigan over the weekend. Good thing, because the next game is at Michigan State tonight. A great chance for the Illini buff and polish their fading NCAA hopes.

Illini coach John Groce says his team must improve on defense and shot-making if it wants any chance of upsetting the Spartans. Honestly, that may not even be enough to win in the Breslin Center vs. the uber-tough Spartans squad.

Illinois will have little chance at victory unless it can contain big Adreian Payne, who I think is the best big man in the Big Ten. It seems the NBA also thinks a lot about the big fella.

According to reports, Nebraska reserve running back Braylon Heard is transferring. Players transfer all the time, but it seems to have become commonplace at Nebraska, and that disturbs Tom Shatel of the Omaha World-Herald.

Shatel says Nebraska has had four high-profile recruits leave in the past year: defensive tackle Todd Peat Jr., offensive tackle Tyler Moore, running back Aaron Green and guard Ryan Klachko. Their reasons were different. Now, apparently, Heard is joining the club. The Huskers could have used him, perhaps as a slot receiver.

Can?t wait for National Signing Day, which is next Wednesday, Brutus? Well, here?s a video preview of what Ohio State fans can expect, compliments of Doug Lesmerises of the Cleveland Plain Dealer. Roll it! Don?t wanna be a buzz kill, but the Buckeyes are poised to sign a lot of really, really good players. I know, it?s a shock. And it?ll happen again next year ? and the year after that, and the year after that, and ? well, you get the idea.

Penn State is pinched by scholarship limitations due to NCAA sanctions. That means Bill O?Brien has to rely on walk-ons. Only, he doesn?t call them ?walk-ons.? In O?Brien?s world, they are ?run-ons.? And he recently added four more.

I?ve been slacking on my Harbaugh story links, what with the Super Bowl just days away. So, here you go. Turns out that were on the same Pioneer High team in Ann Arbor in 1979.

Jon Horford, with this gem: "Our scout team runs Northwestern's stuff almost as well as Northwestern runs it."

My take: That hurts.

My take: Yes, this is gonna be great in Bloomington on Saturday night.

#badgers officials announce no increase in season tix for football, men's hoops or men's hockey for next year.

My take:  This has to make Badgers fans smile. More money for brats and beer!

My take: The good news keeps rolling in for Minnesota!

Not sure Eliason or Walker can ever be impact centers for Tubby. But Hammons, McGary, Woodbury will be handful next year as sophs.

My take: Some nice young big men in the B1G, huh?

Tom Crean on IU's win at Purdue: "When you win here, you've accomplished something."

My take: Well, Bucknell won in Mackey Arena this year, so, I don?t know about that.