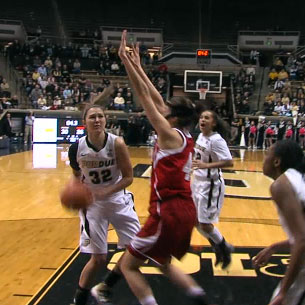 Sam Ostarello had 14 points and 10 rebounds Thursday night to lead No. 14 Purdue to a 59-42 win over Indiana. KK Houser and April Wilson scored 12 points apiece for the Boilermakers (18-3, 7-1 Big Ten). Taylor Manuel added 11 points for Purdue, which held a 45-30 rebounding edge. It was one of six games in the Big Ten on Thursday and several of them ended in upsets.

Illinois 74, No. 24 Iowa 62: Illinois used  a balanced scoring attack in which four starters scored in double-digits, to earn a 74-62 victory over the visiting No. 24 Iowa Hawkeyes. The victory marked the first conference win inside Assembly Hall for the Orange and Ball. With the score tied at 60-60 with 5:31 left in the game, the Illini produced a 14-2 run to put the pesky Hawkeyes away. More at FightingIllini.com.

Wisconsin 63, No. 7 Penn State 61: Morgan Paige scored a career-high 33 points to lead Wisconsin to a 63-61 upset over seventh-ranked Penn State on Thursday night. Tiera Stephens scored the game-winner on a putback with 5 seconds left to end the Nittany Lions' 12-game winning streak.