Super Seven: Who can bring the intimidation? 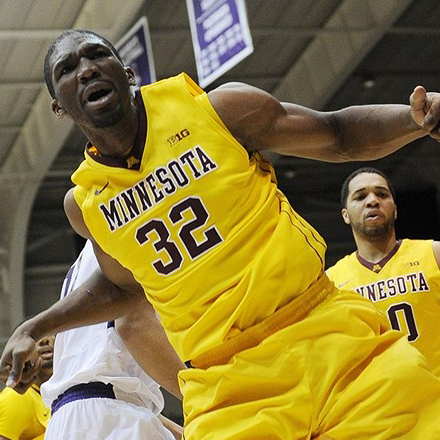 Basketball isn?t all about shooting, rebounding, passing and setting picks. Intimidation also is a factor. Remember those ?Bad Boys? Detroit Pistons teams that won world titles? There?s nothing like having a rough and rugged player who strikes fear into opponents. His presence creates operating room for teammates, while also commanding respect from foes.

The Big Ten has several players who bring an intimidation factor to the court. Here?s a look at the seven most intimidating players in the Big Ten in my latest installment of the Super Seven.

1. Trevor Mbakwe, Minnesota. The 6-8, 245-pound bundle of muscle and might is dealing with a wrist issue that has hampered him the past two games. But when Mbakwe is full-go, he?s a physical monster with strength and power that makes him a dominating force on the glass and in the paint. The senior flexes his mojo as the Big Ten?s top rebounder. Look it up. And then quake in your sneakers.

2. Derrick Nix, Michigan State. The 6-9, 270-pound Nix is unrivaled when it comes to power and strength. He arrived on campus with an unrefined body and iffy work ethic, but the senior has molded himself into a powerful force who can control the lane. He?s the closest thing to an NFL player running up and down a Big Ten court near you. Keep your head up, opponents.

3. Branden Dawson, Michigan State. The 6-6, 230-pound Dawson is a dynamic physical force. The sophomore?s combination of power and strength is unmatched, as witnessed by his explosiveness around the rim and power at the point of attack. Have you seen this guy get off the floor? And Dawson is tougher than two-month old beef jerky.

4. Adreian Payne, Michigan State. Tom Izzo has said that the 6-10 junior is the best big man he has had. No argument here. Payne is a unique combination of length and power, a bundle of hard-wired muscle who can play anywhere on the court. Payne can drain a three-pointer, nail a mind-range jumper or dominate at the rim. And he dares you to drive the lane. Go ahead. Try it.

5. Mitch McGary, Michigan. He?s only a freshman, but McGary is a dynamic talent who quickly has developed into a key player in the Wolverines? rotation. The 6-10, 250-pound McGary runs the floor as well as any big man while also having the power and muscle to bang down low.

6. A.J. Hammons, Purdue. He?s just a freshman, but Hammons already is a massive presence in the paint. Did you see his 30-point effort last night vs. Indiana? Foes have to think twice before driving into the paint with 280 pounds of Hammons lurking. The 7-footer leads the Big Ten with 40 blocks. Just wait until the kid has had time to alter his diet and lift weights. If Hammons really wants it, he could become one of the nation?s best big men.

7. Cody Zeller, Indiana. The 7-0, 240-pound Zeller can score in a variety of ways, with a nice array of moves on the blocks and decent mid-range game. But he doesn?t get enough credit for the defense he plays. Zeller crashes the glass and intimidates players who drive to the hoop as a shot blocker. And he really has improved his strength.