No. 1 Michigan drills Northwestern, moves to 20-1 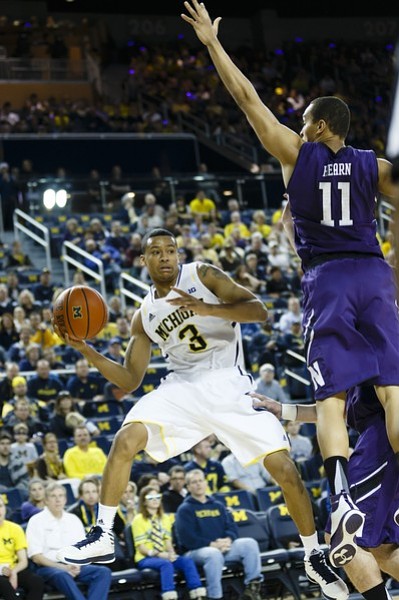 Trey Burke had 18 points and eight assists, and No. 1 Michigan was nearly flawless at the start Wednesday night en route to a 68-46 victory over Northwestern. The Wolverines made 10 of their first 11 shots and went the entire first half without a turnover. They didn't commit a foul, either, until the final minute of the half.

Michigan took over the top spot in the AP poll this week for the first time since the 1992-93 season. The Wolverines can now prepare for Saturday night's showdown at No. 3 Indiana.

Nik Stauskas drives for the dunk:

FINAL: No. 2 Michigan used stingy defense to defeat Northwestern 68-46 on Wednesday at Crisler Center in Ann Arbor. Michigan (20-1) held Northwestern (12-10) to 37 percent shooting from the field. Trey Burke carried the offensive load for the Wolverines, finishing with 18 points, four rebounds, eight assists, and 6-of-11 shooting from the field. Glenn Robinson III was 6-of-7 from the floor and chipped in 13 points for Michigan. The Wolverines hit 51 percent of their field goals (25-of-49) and also got double-digit contributions from Jon Horford (10 points) and Nik Stauskas (11 points). Jared Swopshire had eight points and corralled eight rebounds for the Wildcats in a losing effort. Northwestern got double-figure scoring from Alex Olah (10 points).

HALFTIME: Trey Burke has 10 points on 4-of-6 shooting to lead No. 1 Michigan to a 36-21 lead over Northwestern at the end of the first half. The Wolverines shot 61 percent (14-of-23), including 63 percent from downtown (5-of-8), and recorded 10 assists on their 14 field goals. Nik Stauskas added night points and Glenn Robinson III chipped in eight for the Wolverines. Dave Sobolewski, Reggie Hearn and Alex Marcotullio all scored five points apiece to pace Northwestern.