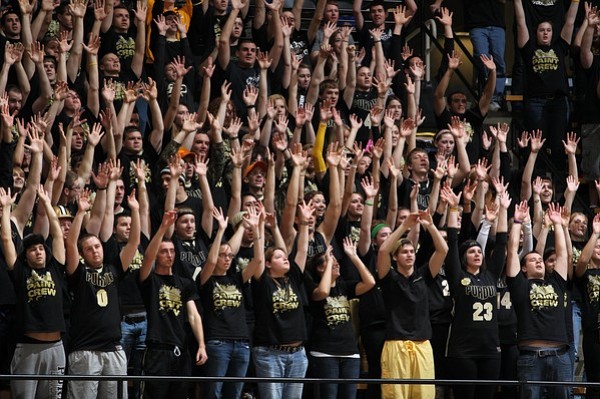 It?s Super Wednesday, America. That means two games on BTN, including No. 3 Indiana at Purdue, one of the best rivalries in college sports. The Hoosiers want to remain in the Big Ten title hunt, while the Boilermakers are fighting for their postseason life and need all the quality wins they can muster. Let?s start daily links there.

Yes, many of the players on the teams are very familiar with each other from AAU and prep days. Eight players who are expected to start tonight are from the state. In 18 Indiana-Purdue games over the past 10 years, there have never been more than six starters from the state, says Terry Hutchens of the Indianapolis Star. Despite the familiarity, it?s still a hot rivalry.

Can?t wait to watch A.J. Hammons lock up with Cody Zeller. Hammons says he?s ready. We shall see. Which big fella gets in foul trouble first?

And you can take a walk down memory lane with this photo montage of the vicious series.

People are smiling in Minnesota-finally! You see, the Golden Gophers ended a confounding four-game losing skid that knocked them out of Big Ten contention with a win over Nebraska last night.

The best part of the victory for Minnesota was the re-emergence of Rodney Williams, who tallied a season-high 23 points to help improve the Gophers to 16-5 overall and 4-4 in Big Ten action. In the previous two games, the senior co-captain hit only 3-of-17 shots.

"Rodney Williams really came out focused; it always sets a good tone for our team," coach Tubby Smith said. "Not just the scoring, but in a lot of ways he was active and engaged. We made some adjustments in our offense to try to get him involved early, and it paid off."

Iowa is a young and promising team. And one of the most promising players is freshman Mike Gesell, who is making a seamless transition from point guard to off guard.

Gesell?s struggles at the point during the non-conference coupled with the development of fellow freshman Anthony Clemmons at the point made the move for Gesell a no-brainer.

[ENTER TO WIN: The Buffalo Wild Wings Trip to the Tournament sweepstakes. ]

The No. 1 ranking at Michigan is great and all. But the freshmen aren?t going ga-ga over it. Good. Because, honestly, it means absolutely nothing in late January. Still, it is kinda cool, huh?

Stop me if you?ve heard this before: rebounding is an issue for Northwestern.

Do you remember Greg Oden? Sure you do! The former Ohio State star and No. 1 overall draft pick of the 2007 draft whose career was cut short-WAY short-by knee issues is confident he?ll return to the NBA. Oden is only 25 years old. So, who knows?

It seems every day, some Big Ten A.D. gives his view on league expansion and divisional realignment. This time, it?s Penn State A.D. David Joyner?s turn. No big revelations. Joyner reiterates the notion that geography will play a big role in drawing up new divisions. Watch the one-on-one conversation here.

Count Steve Sipple of the Lincoln Journal-Star among those who think the fuss over recruiting is out of hand. I agree.

His shining example of the dangers of excess of hype is a good one: Thunder Collins. Remember him, Huskers fans? Sure you do! The next great Huskers running back who wasn?t. Sipple blames the media and fans for often creating expectations on recruits that are unreasonable. But sometimes, the recruits are to blame for the excessive hype.

Remember Jimmy Clausen arriving at the College Football Hall of Fame in a stretch limbo to commit to Notre Dame? And players often call attention-grabbing press conferences to announce their decisions, drawing more headlines and whipping up more of a frenzy. My point: There?s plenty of blame on both sides of the fence when it comes to the ?silly season? of recruiting excess/excitement, as Sipple puts it.

Speaking of recruiting, it seems some Illinois football fans are rankled because the Fighting Illini have few Chicago-area prospects committed.

?To do that, they?ve got to win,? said recruiting guru Tom Lemming. ?The coaches have done their job. The organization is there. The early offers are there. They staying on top of the recruits and building relationships. Illinois has got great academics and very good facilities. What they?re lacking are the wins.?

Don?t wanna bum you out, Penn State fans. But here?s a piece of some top prep players that the Nittany Lions had legit shots to ink who won?t land in State College, Pa.

It seems former Michigan coach Rich Rodriguez had some things to say about his not-so-successful coaching days in Ann Arbor, including the notion that some Wolverines felt a sense of entitlement.

"We had some guys committed at Michigan, but we had others that weren?t," Rodriguez told The Sporting News. "Some guys felt a sense of entitlement. The name on the chest, and 'I?ve already arrived.? ?

I have to think this is the case at most big-time schools, right?

Minnesota, like most Big Ten teams, simply had too much size/athleticism/strength for #Nebrasketball. Still, too many easy baskets.

My take: Yes, Tim Miles needs more time. I hope he gets it.

My take: No argument from me.

I thought tonight's episode of "Woodsmith Shop" was a bit slow. Then I realized I was watching Wisconsin-Ohio State instead.

My take: This guy is hilarious. Really. He is.

Iowa freshman guard Mike Gesell just said that he's never received worse than an A-minus in any class during his entire life.

My take: Gesell is one of THOSE guys, huh? I hate those kind of guys. (Just kidding.)

Big Ten starting to take its shape. Indiana and Michigan at the top. OSU and MSU close behind. Wisconsin, Minnesota 5+6. Then the rest…

My take: Jeremy is spot-on, as usual.

My take: Yes, don?t you feel happy for Tubby? I know I do.

Over their last three games, the Badgers have been outscored 66-30 in the paint and 25-11 at the FT line.

My take: Not good. Gotta put the ball on the deck and drive.