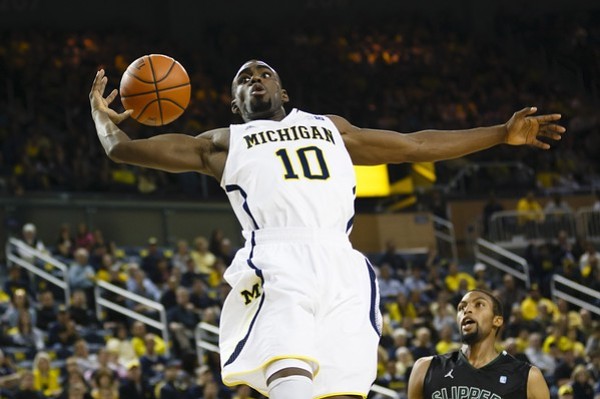 It?s all coming together for Tim Hardaway Jr., during his junior season at Michigan. He?s enjoying the best season of his Wolverine tenure-and Michigan is ranked No. 1 for the first time since 1992-93 as it tries to win the school?s first national title since Glen Rice led the school to the Promised Land in 1988-89.

The 6-6, 205-pound native of Miami, has a new level of maturity that had been missing from his game his first two seasons on campus. To wit, his shot selection has improved. Hardaway is hitting 49.1 percent of his field-goal attempts. Last season, he shot 41.8 percent. And Hardaway?s accuracy from three-point has really jumped, from 28.3 in 2011-12 to 40.9 this season.

So, it?s no shock that Hardaway is averaging a career-best 15.9 points. No doubt, playing in tandem with point guard Trey Burke helps create opportunities for Hardaway, who also benefits from the presence of a talented group of freshmen led by Glenn Robinson III and Nik Stauskas.

Still, Hardaway has worked diligently to improve his game-and it shows for the Wolverines (19-1 overall; 6-1 Big Ten), who are tied for first in the Big Ten with No. 3 Indiana.

I caught up with Hardaway this week as he and his Wolverine teammates prepped to play host to Northwestern tonight (6:30 p.m. ET, BTN/BTN2Go) before playing a huge game at Indiana on Saturday.

Q: What have you done to help take your game to a different level?
A: I?m just trying to help the team any way I can, to just have that type of mentality. I think that?s maturity coming into play and having the right group of guys around you to help you out. I spent time working on many aspects of my game in the offseason. I knew I could get better. We all can.

Q: What did you do over the summer to hone your skills?
A: I wanted to get to know the offense better. I wanted to be able to play multiple positions out there if needed. I also went to a lot of camps, Kevin Durant, LeBron and others. I was able to play with and against Trey Burke when I was there. I was able to get some ideas from Trey and the other players at the camps to see what they were working on. I also worked on my ballhandling, defense and just getting better overall as an individual.

Q: At what point did you think this could be a really good team?
A: In the open gyms over the summer. A lot of (the sessions) were very competitive. I saw a lot of winning mentalities. And having the freshmen come in who are so humble, wanting to learn from the get-go was good for our team.

Q: Are you and Trey Burke good friends?
A: Yes. We all are family. Everyone here is family. We treat each other with respect. This is as close to a family we get to during the season when our real families aren?t around. Our relationship is as strong as it ever has been. We are just trying to have fun and make the most of it.

Q: Of the freshmen, who has stood out?
A: Caris LeVert. From when he got here to now, he has done everything asked of him. He does a great job of listening and wants to learn. He likes to go out there and play. That?s what you want from a freshman. He came out of a redshirt to starting a game when I was out. He is making the most of it and is learning from the veterans.

Q: What?s it like to play for the No. 1 team in the nation?
A: It?s great. Coach Beilein is doing a good job of keeping us in the moment. And that?s what we?re doing, trying to get better each and every day. It?s great for social media, our fans and families that love Michigan. But we know what?s ahead of us and we know what we have to do to get better.

Q: Do you talk to any members of the Fab Five?
A: Jalen Rose comes here every once in a while. Jimmy King, too. Juwan Howard I know from when he played with the Heat and I am from Miami. So I see him. They are very proud of us and rooting for us.

Q: How good can this team be?
A: If we keep working hard and playing within the system, many things will be possible. It?s going to be fun.