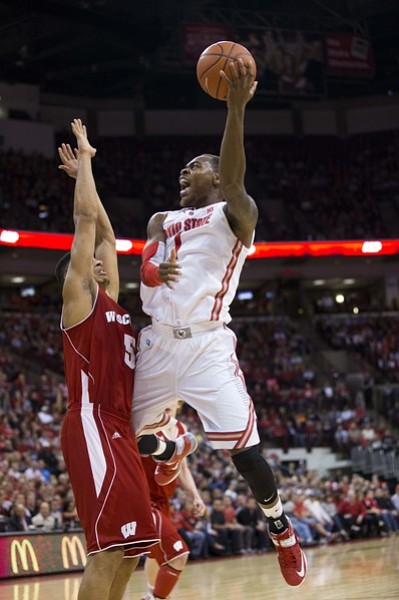 In a matchup of the Big Ten's two best defenses, it was Ohio State that prevailed with a nine-point home victory over Wisconsin. Both of these teams rely on good old fashioned B1G defense: make you miss (without fouling), then secure the carom. Turnovers are optional.

True to form, both defenses controlled the glass at their respective ends, and neither team got to the foul line on a regular basis. In fact, for the first time in Bo Ryan's 12 seasons, the Badgers failed to earn a single free throw. This is a rare occurrence, to be sure, but Wisconsin's shot distribution was part of the reason it happened.

Wisconsin took over half its shot from three, which actually isn't a bad thing to do when you're making 39 percent of them. The real problem was the dismal conversion rate on twos, specifically the dreaded two-point jumper.

Simply put, the Badgers were not going inside on Ohio State, and on top of that, Thad Matta's teams are always among the best in the nation at avoiding fouls:

Defending without fouling is a big part of Matta's philsophy, so the combination of the perimeter-happy Badgers and the foul-averse Buckeyes is one that can produce such a rare result.

At the other end, Ohio State posted the second-highest effective field goal percentage allowed by Wisconsin all season (only mighty Florida fared better in its November blowout of the Badgers). As usual, Wisconsin's perimeter defense was outstanding, and to Ohio State's credit, it didn't force up tough threes. Instead, it was dominance at the rim that paved the way for the good shooting night.

More than anything else, I'd bet Bo Ryan is most unhappy about Ohio State's 21 point-blank looks. Deshaun Thomas went seven-for-seven on layups en route to 25 points, a total made even more impressive by the game's plodding pace (55 possessions).

Next, the Buckeyes have a Saturday tuneup against Nebraska ahead of a huge week (at Michigan, vs Indiana). Similar to Michigan State's "defense and Draymond" prescription of a season ago, "defense and Deshaun" just might make Ohio State conference title contenders yet again.

Tonight, it's a doubleheader on BTN. The appetizer is Michigan's hosting of Northwestern (5:30pm CT), followed by the main event of Indiana at Purdue (7:30pm CT). The Boilermakers have been playing better ball of late, and this rivalry always brings memorable moments.