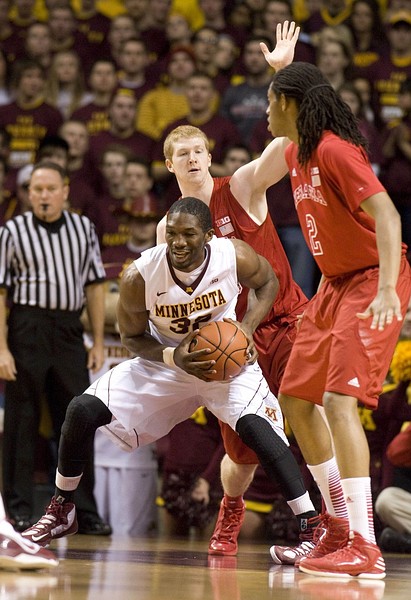 Rodney Williams snapped out of a funk to score 23 points and No. 23 Minnesota got a much-needed confidence boost with an 84-65 victory over Nebraska on Tuesday night. Andre Hollins scored 14 points and Austin Hollins had 13 points and five assists for the Golden Gophers (16-5, 4-4 Big Ten), who snapped a four-game losing skid that caused them to plummet in the rankings.

Ray Gallegos scored 30 points for Nebraska (11-11, 2-7), which committed 13 turnovers to offset some impressive shooting. The Huskers shot 54.5 percent for the game, but were outrebounded 36-19 and forced just six turnovers by Minnesota.

Gallegos, who made 12 of 17 shots including six 3-pointers, didn't get much help. Brandon Ubel scored 13 points and Shavon Shields had 10.

Austin Hollins chips in with a putback of his own:

It's been a one-man show for Nebraska, as Gallegos has 30 of the Huskers' 62 points. #Gophers

We need to cut down on our turnovers and rebound better in the second half.

Gallegos with a great first half, but the Huskers go to the locker room down 44-35 #Huskers

BREAKING: Minnesota misses a shot, AND Nebraska gets the rebound.

My problem with the switch right now is that the #Gophers (and Rodney) had some pretty nice momentum going. Why kill that?

Tubby's back to the tried-and-(true?) subbing of 5-for-5. Probably can get away with it this time … #Gophers

Tubby with the platoon again. Of course Nebraska then cuts it to an eight-point game. #Gophers

Defending the pick and roll seems like a foreign concept tonight…

And there is No. 150 for Rodney Williams. #Gophers pitching a shutout, 7-0. #DunkOMeter

Rodney Williams already has as many points (2) as he did the entire game against Wisconsin. #Gophers

Williams starts the game off with a dunk. Is he back? We'll see.

FINAL: Ray Gallegos poured in a career-high 30 points for Nebraska, but it was not enough as No. 23 Minnesota cruised to a 84-65 victory Tuesday at Williams Arena in Minneapolis. The Gophers (16-5) hit 54 percent of their field goals (32-of-59) and still grabbed 18 offensive rebounds. Rodney Williams Jr. sparked Minnesota with 23 points – one away from tying his career-high – and six rebounds. The Golden Gophers also got double-digit efforts from Andre Hollins (14 points) and Austin Hollins (11 points). Brandon Ubel was 6-of-7 from the floor and chipped in 13 points for Nebraska (11-11), which hit 55 percent from the field (24-of-44). More Nebraska scoring came from Shavon Shields (10 points).