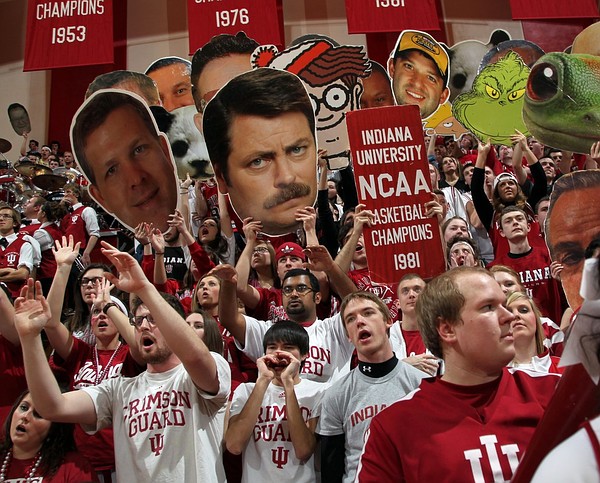 This week is all about No. 1 Michigan?s trip to No. 3 Indiana on Saturday night. The winner will be in the driver?s seat in the Big Ten race-and solidify its case as a national championship contender.

But before that, the Hoosiers have a testy game at Purdue on Wednesday (8:30 p.m. on BTN/BTN2Go). Beware, Indiana! And Wisconsin also plays two big games that will determine if the Badgers can get back into the Big Ten chase with visits to Ohio State (tonight) and Illinois (Sunday).

Speaking of the Fighting Illini, they also have a monster week with that visit from the Badgers and before that a trip to Michigan State on Thursday. Win both, and suddenly Illinois is looking good again.

Here is a ranking of this week?s games.

1. Michigan at Indiana, Saturday. This is a battle between the No. 1 Wolverines and No. 3 Hoosiers who are tied for first in the Big Ten. It doesn?t get any better than this. Each team loves to work in transition, so expect the game to be played in the 80s. For Indiana to win, Cody Zeller needs to play well vs. an average Michigan interior. Trey Burke needs to play like a national player of the year, but Victor Oladipo will get after him.

2. Wisconsin at Ohio State, Tuesday. The Badgers fear no one on the road. Ask Indiana. The Buckeyes are tough in their house, having already knocked off Michigan-the Wolverines? lone loss of the season. To have any shot at winning, Wisconsin has to shoot better than it has recently. If the Badgers lock up Deshaun Thomas, will any other Buckeyes step up?

3. Indiana at Purdue, Wednesday. The Hoosiers can?t be caught looking ahead to their big matchup with Michigan on Saturday. This is an iconic rivalry, with Indiana taking the last two meetings, including a 78-61 win last season in West Lafayette. Purdue will have no chance unless it shoots well. And how will A.J. Hammons deal with Cody Zeller? Keep an eye on the battle of freshman point guards: Ronnie Johnson vs. Yogi Ferrell.

4. Wisconsin at Illinois, Sunday. Is this the same Illinois team that has wins over two top-10 squads? The Badgers look to build on their narrow victory vs. Minnesota over the weekend-and shoot better. Jared Berggren is in a horrid slump. Unless the Illini?s defense tightens-especially at the rim-they will struggle to win this big home game.

5. Iowa at Minnesota, Sunday. The Gophers are still ranked and considered an NCAA tourney team, but they need to taste some success. And they need a big week and must beat a Hawkeyes squad that has won only two of its last five games. Minnesota must be physical and work the interior with Trevor Mbakwe and Rodney Williams.

6. Illinois at Michigan State, Thursday. The Illini need to polish their NCAA resume. A win at East Lansing would help. But the Spartans are a big mismatch in the paint for Illinois with Adreian Payne and Derrick Nix. Still, if the Illini are shooting well ? But know this: Illinois is 2-5 in January.

7. Nebraska at Minnesota, Tuesday. Don?t look now, but the Huskers have won two of their last three. Credit Tim Miles. Conversely, the Golden Gophers have lost four in a row. Minnesota needs to get Rodney Williams on track and hope Trevor Mbakwe?s aching wrist is OK. Did anyone think this was gonna be a game Minnesota would have to worry about back in November?

8. Purdue at Northwestern, Saturday. Each team needs this win if it wants to keep any faint-and I mean faint-NCAA tourney dreams alive. Can the poor-shooting Boilermakers deal with the Wildcats? confounding zone?

9. Penn State at Iowa, Thursday. This is a game the Hawkeyes have to win at home vs. a Nittany Lions squad that still is searching for its first Big Ten win. Iowa needs to regain its shooting touch. Now is the time vs. an offensively challenged Penn State squad.

10. Ohio State at Nebraska, Saturday. Will the Buckeyes be motivated and focused playing a spunky Cornhuskers? squad? This one may not be pretty for OSU. But, a win is a win, right?

11. Northwestern at Michigan, Wednesday. The Wildcats lost the momentum of wins at Illinois and vs. Minnesota when they stumbled at Nebraska on Saturday. Trying to regain mojo at recently-minted No. 1 Michigan? Ugh. But, NU did take Michigan to overtime twice last season.