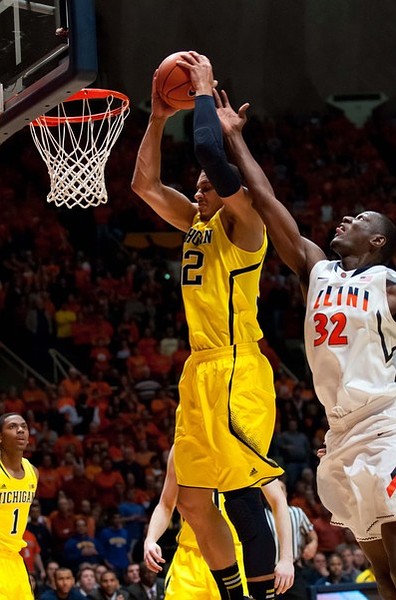 If there?s any subject that?s sure to get a good college basketball debate going, it?s defense. It?s easy to see why-we don?t have very good ways of measuring defense. At the individual level, we have steals, blocks, and defensive rebounds. And some people don?t believe that last one is actually ?defense:?

So this works if rebounding is, in fact, defense. It's not. It has an impact but the top ten teams in defensive rebounding are 54th, 144th, 162nd, 147th, 103rd, 171st, 240th, 64th, 18th, and 25th in defensive efficiency. As I mentioned when pooh-poohing Mason Plumlee's KPOY candidacy, rebounding is the least important of the four factors. It's only its trackability that makes it so prominent. It's easy to say who got a rebound. It's really hard to credit someone for an effective rotation.

I don?t disagree with the last point. It is hard to credit a rotation, and it?s very simple to credit a rebound. But I don?t think eyeballing the top 10 in defensive rebounding and declaring the statistic ineffective is right, either. If we go by this method, then we get into all sorts of trouble:

The clear takeaway from this table is that if we could measure individual contributions to defensive effective field goal percentage, we?d be set. But we don?t have the means right now. Blocked shots affect two-pointers, sure, but that?s only a portion of eFG, and it doesn?t come close to capturing the full effect.

But I do think there is a bit of a double standard at play:

BONUS WONKY STATS COMPLAINT. Most attempts to compile defensive numbers underrate the value of a steal, by the way. A defensive rebound is just the successful conclusion of a defensive possession ending in a missed shot. A steal ends a possession by itself-it's the miss and the rebound rolled into one-and frequently leads to a transition opportunity at the other end. That latter part is not well accounted for.

There are two problems with this complaint. The first is that we probably overrate the value of a steal. With respect to those Bruce Pearl Tennessee teams that ran a full court pressing defense, Ken Pomeroy had this to say:

There's a glitch in Tennessee's famed pressure defense that will cause them problems against strong competition–the kind of competition that is absent in the SEC this season. The Vols' defense is heavily dependent on forcing turnovers. To put it more accurately, they rely on turnovers happening. That's a key distinction, because while every turnover has its own characteristics, ball security is more under the control of the offense than the defense.

Follow the link if you want the statistical explanation, but that?s the conclusion. But even if we assume that steals are principally causing turnovers, the table above shows that it?s not that different from defensive rebounding in this respect (As a sidenote, I wonder if the ?top 10? was chosen because it?s a nice round number, or if it was because the 11th-best defensive rebounding team in the country happens to also be the best defense). If we?re to adhere to the top-10 metric, then all hail Josh Oglesby.

Of course, that?s silly. Josh Oglesby is a good defender. In fact, he?s a pretty poor defender. So I submit that this ?top-10? method might not be the best way to evaluate the four factors.

Here?s what we do know about Stops: it does rely on the team?s overall ability to force missed, non-blocked shots because there?s no way to individualize that right now. Yes, that?s a failing, but one I can live with. It balances the value of missed shots compared to defensive rebounds based on a team?s ability to do both. It also gives more credit to steals than blocks, and more credit to blocks than defensive rebounds (because those things are harder and more valuable). It also doesn?t account for fouls, however, there?s a much more complex Stops formula that does account for fouls (and is probably more precise). We?ll have those numbers toward the end of the season, but I don?t think it will change the results all that much.

Is Stops perfect? Heck no. But it?s probably better than plus/minus. We used to dabble in plus/minus territory a lot more, but we soon found some really strange results that made us question whether it was a valuable statistic. Indeed, over the short length of a college basketball season, it probably is not.

Another objection to Stops is that it rewards taller post players that rebound. I have to admit, this criticism is difficult to understand. I won?t claim to be a street ball superstar, but I?ve played enough pickup games to know that, when in doubt, just pick the tall guy. If anything, the fact that Stops rewards taller players should be seen as an endorsement of the statistic, not an indictment.

I suspect that if AJ Hammons and Jordan Morgan switched their statistics, no one would bat an eye. Hammons is regarded as a burgeoning defensive talent because his defense is ?loud.? But Morgan?s defense is primarily rebounding, and frankly, his reputation precedes him. He?s always been regarded as something like an average defender. But I think it?s time to dispense with that outdated view of him:

If that last number looks really high, that?s because it is. For comparison, DeJuan Blair?s conference defensive rebounding percentage in his final college season was 29.1. And one needs to remember that Michigan is one of the best defensive rebounding teams in the country, meaning that Morgan is not only fighting off opponents for his rebounds, he?s also competing with his very good rebounding teammates.

(I do think it?s fair to question whether Morgan can keep this level of rebounding up, but so far in Big Ten play he?s been a devastating rebounder.)

The problem with the eye test is that it soon devolves into a biased shouting match. Indiana fans will tell you the best defender is Victor Oladipo. Ohio State fans will insist you?re crazy unless you pick Aaron Craft. Purdue fans will point to Hammons. Wisconsin fans will say that either Ryan Evans or Jared Berggren are better than all of those guys. And so on.

So I?m no fan of the eye test, but I won?t begrudge others who favor it, whether for defense, offense, or anything else. There?s plenty of room for everyone at the college basketball table. But when the eye test doesn?t match the numbers, we shouldn?t be surprised. That?s probably the norm.