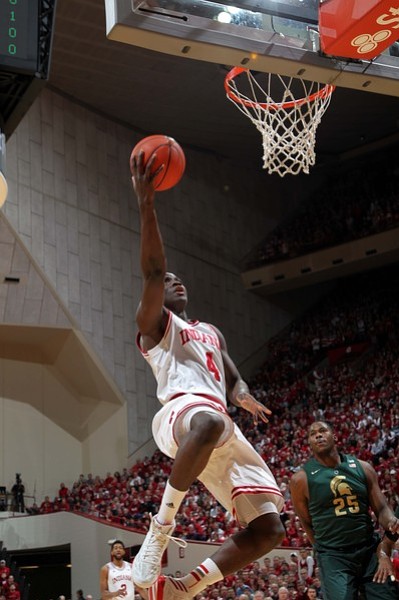 Indiana held serve against Michigan State to move into a tie with Michigan atop the Big Ten standings. Normally, I'd use this opportunity to point out that although Indiana won by 5, the outcome actually suggests that Michigan State is the better team. But I don't think that's true here, because Indiana was equal to or better than the Spartans in all but one category-three-point shooting. MSU made 11 of its 23 attempts from behind the three-point line, and I'll go ahead and call that an aberration.

While IU's perimeter defense isn't exactly a strength (teams are more than willing to shoot threes on the Hoosiers, even though IU doesn't exactly discourage two-point shooting with a lot of blocked shots), it's probably less of a strength for Michigan State to make so many treys. Coming into the game, MSU had not made more than 10 threes in a game since 2010. Bottom line, this was probably more like a 10-point win for Indiana on a normal shooting night for Michigan State.

That said, Gary Harris was fantastic in this game, getting 21 points on 13 shots, and, most importantly, committing zero turnovers. Unfortunately, the same could not be said about Keith Appling, who had one of his worst-ever games in a Spartan uniform (3 points, zero assists, 4 turnovers, and 5 fouls).

On Indiana's side, the best player on the floor was Victor Oladipo, who led the way with 21 points (12 shots), 7 rebounds, and an amazing 6 steals to go with 3 blocks. He's certainly going to be on the shortlist for defensive player of the year, although the fact that he doesn't fit the archetype may work against him in that regard. That said, it's memorable performances like this one that often dictate where these awards go. But what do the numbers say? Let's look at Stops:

Well, this is interesting-we have a couple of freshmen leading the way. Both Woodbury and McGary are tremendous rebounders (as is Jordan Morgan this season), which explains why they rate so high. And to those who complain that Stops unfairly rewards good rebounders, I think that's about as valid a point as the complaint that offensive rating unfairly rewards efficient scorers. Rebounding is defense-a big part of it.

The numbers do say that Oladipo is an above-average defender, one of the best perimeter defenders, in fact. But a handful of other players rate higher (Lenzelle Smith, Joseph Bertrand, Denzel Valentine, and Shavon Shields). Of course, there's another aspect of defense that this stat does not pick up, which is rather important-fouls. Let's see how those Stops leaders stack up there:

Wisconsin edged Minnesota in a game with a wild finish. But in my view, Wisconsin's domination of the glass overshadowed the end-of-game theatrics. The Gophers are the best offensive rebounding team in the country, and all the Badgers did on Saturday was render them something closer to Northwestern. Minnesota managed to contain only 25 percent of their frequent misses-and that's the other key stat to this game: Minnesota made just 31 percent of their two-point attempts.

Historically, most of the time when you heard that Wisconsin was an excellent defensive team, it was really just people pointing out that the Badgers play slow.

(Truth be told, Bo Ryan has had just as many great offensive teams as defensive. Over his 11 seasons, Wisconsin has led the Big Ten in points per possession 5 times. That's right, about half of the time over the past decade or so, the Wisconsin Badgers have been the best offensive team in the Big Ten.)

This year, however, Wisconsin really does have a great defense-the best in the Big Ten through conference play so far, in fact. And that defense was on full display on Saturday, as the Badgers limited Minnesota to just 0.86 points per possession. That's probably how Wisconsin is going to win the majority of its games this season. Too much of the offense flows through an inefficient Ryan Evans for UW to hope for much better than an average offensive efficiency, so the team is going to have to win with defense.

That said, one can only hope that we aren't treated to the extremes we saw on Saturday. Between both teams, only one player scored more than 10 points (Andre Hollins, 20 points on 13 shots).

Minnesota's now lost four in a row, but the good news is that they can get well at home against Nebraska. The Badgers will pack their bags to play a couple of road games at Ohio State and Illinois. If they win both of those, they might have the inside track on the conference crown, depending on what Michigan and Indiana do in the interim.

The Hawkeyes missed an opportunity to pick up a road win by falling short in overtime. This was a pretty ugly affair, as both teams fell well short of the point-per-possession threshold. Purdue's interior defense was outstanding on the day, as the Boilers limited the Hawkeyes to just 32 percent shooting on their two pointers. This included a 7 for 19 effort on layups.

Both teams failed to get good shots, as the offenses dined on mid-range attempts:

Any offense built around that many two-point jumpers is going to be inefficient. Surprisingly, it was the freshmen that paved the way for both teams. Mike Gesell scored 18 points on 11 shots, while Ronnie Johnson matched his career high with 15 points on 12 shots.

Iowa now sits at 2-5, but it's a misleading record. The Hawkeyes still have home games remaining against Illinois, Purdue, Northwestern, Penn State, and Nebraska, as well as road games against the latter two. That said, by losing this game, Iowa now has to go on the road and beat one of Indiana, Wisconsin, or Minnesota to finish at 9-9. It's possible, but it won't be easy.

At 4-3, Purdue might make things interesting. If they can sweep Northwestern and win at Penn State, they'll have a chance to get in the bubble conversation. Unfortunately, with their non-conference resume, the Boilermakers probably have to get to at least 9-9 to get in the discussion, and they still has a lot of games remaining against the top of the conference.

For once, Ohio State's offense did pretty well despite the fact that Deshaun Thomas had an off game. Thomas scored just 11 points on 13 shots in OSU's win over a hapless Penn State team. Picking up the slack for Thomas was Sam Thompson, who had a great line of 16 points (7 shots), 6 rebounds, 2 blocks, 2 steals, and just one foul committed. I don't think there should be much debate about the fact that this was the best game of the sophomore forward's college career. I have to admit, I've thought Thompson was a future star since he was in high school, but his jumpshot has been slow to develop in Columbus. On Saturday, Thompson knocked down both of his three-point attempts, and he's now up to 31 percent from long range on the seasons. If he can continue to improve his outside shooting, he's an extremely tough matchup.

Penn State, meanwhile, is still searching for its first Big Ten win. And at this point, I'm not sure its going to get one. Indeed, two weeks from now PSU will play the only two games in which it has more than a roll-of-the-dice chance of winning (at home vs. Purdue, on the road at Nebraska). And neither of those look particularly winnable right now. The Nittany Lions' efficiency margin is also now below Indiana 2008-09 levels. This team now has both the worst offense and the worst defense in the conference. Pat Chambers has quite the rebuilding job on his hands.

Northwestern meanwhile, continues to make no sense. I know winning on the road is tough (well, maybe not this year), but you'd expect the Wildcats to at least be competitive with Nebraska. But after the first ten minutes or so, they weren't, and the Huskers cruised to a 15-point win. That said, a lot of the margin can be explained by Northwestern missing a lot of open three-pointers, as NU managed to make just 6 of its 29 attempts from beyond the arc. Dave Sobolewski made 4 of his 8 attempts en route to his 21 points, but the rest of the team was a woeful 2 for 21. Dylan Talley led the way for the Cornhuskers, with 20 points on 15 shots to go along with 8 rebounds.

Northwestern has been alternating wins and losses for the past three weeks, but I suspect that all comes to an end on Wednesday when the team visits Ann Arbor. The Wildcats had to win this game to make it interesting in March, but that's probably not in the cards now. That's probably just as well, we've seen plenty of "is this the year?" pieces for the past few seasons. If Drew Crawford and Jershonn Cobb both come back, we'll see plenty of that in March 2014.

Finally, Michigan destroyed Illinois in Champaign, torching the Illini to the tune of 1.14 points per possession. There were just too many easy looks for the new #1 team, as the Wolverines shot 59 percent on their two-point attempts. It was the third straight blowout home loss for the reeling Illini, who look nothing like the team that won the Maui Invitational.

Michigan will tune up against Northwestern in Ann Arbor on Wednesday before visiting Indiana on Saturday. Needless to say, the only game bigger than that during the regular season will be when they meet again in March.