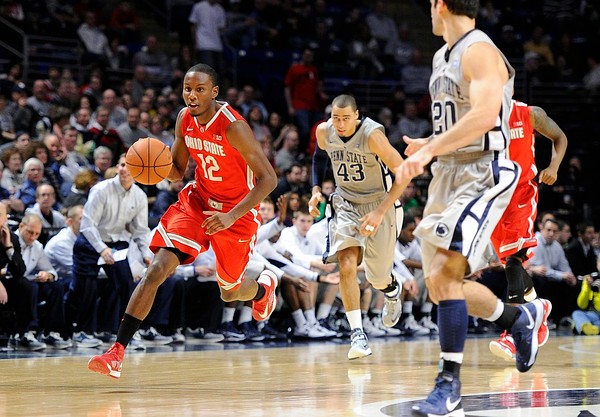 Sam Thompson scored 16 points on 6-of-7 shooting, and No. 15 Ohio State took advantage of cold-shooting Penn State in a 65-51 victory Saturday. Deshaun Thomas added 11 points, well below his Big Ten-leading average of 20.5. Thompson picked up the slack against the Nittany Lions, who went 11-plus minutes of the first half without a field goal.

Sam Thompson gets the steal and transition flush:

Jon Graham with the big-time block:

FINAL: Sam Thompson scored 16 points and grabbed six rebounds and Lenzelle Smith, Jr. added 11 points and eight boards to lead No. 15 Ohio State to a 65-51 victory over Penn State on Saturday at the Bryce Jordan Center. The Buckeyes (15-4), who shot 19-of-23 from the free throw line, also got a double-digit effort from Deshaun Thomas (11 points). D.J. Newbill scored 15 points, corralled four rebounds, had six assists, and made 5-of-9 shots from the floor for Penn State (8-12), which shot just 36 percent from the field (17-of-47). Penn State went 13-of-22 from the charity stripe as a team (59 percent). The Nittany Lions also got a double-digit contribution from Jermaine Marshall (16 points).

HALFTIME: There were no free points for Penn State, as No. 15 Ohio State clamped down defensively to hold the Nittany Lions to 30 percent shooting in the first half and has a 29-18 lead going into the break. The Buckeyes controlled the boards, outrebounding Penn State 21-14 in the first half. The game was tied 11-11 before the Nittany Lions went into a funk, going the next 4:42 without scoring, and allowing Ohio State to take a 19-11 lead with 8:19 to go in the first half. Deshaun Thomas and Sam Thompson each scored seven points to lead eight Buckeyes in the scoring column. Jermaine Marshall and Sasa Borovnjak have carried Penn State, scoring 15 of the team's 18 total points.