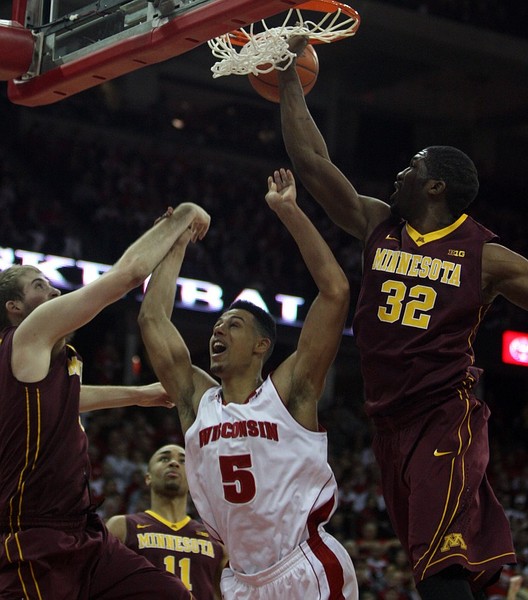 Traevon Jackson just beat the shot clock and hit a 15-foot jumper from the right side with 4 seconds left as Wisconsin got past No. 14 Minnesota 45-44 on Saturday, the Golden Gophers' fourth straight loss.

After Jackson's shot gave the Badgers a 45-43 lead, the Golden Gophers (15-5, 3-4 Big Ten) called a timeout with 1.8 seconds remaining and inbounded from halfcourt. The Badgers' Mike Bruesewitz fouled Trevor Mbakwe on the play, but the big man was unable to shoot the ensuing free throws because of an apparent right hand or wrist injury.

Rodney Williams stepped to the line and made the first free throw, but missed the second and Sam Dekker grabbed the rebound to seal the win for Wisconsin (14-6, 5-2), which ended a two-game slide.

FINAL: Traevon Jackson beat the shot clock to give Wisconsin the lead with 2.1 seconds left, and the Badgers held on for a 45-44 victory over No. 14 Minnesota on Saturday at the Kohl Center. Minnesota had a chance to tie it on the final possession, as Trevor Mbakwe was fouled and sent to the line for two attempts. Mbakwe injured his wrist on the play, however, and Rodney Williams went to the line in his place. Williams hit the first but missed the second, and Sam Dekker grabbed the rebound and ran out the clock. The Badgers limited the Gophers to 16-of-46 shooting from the field (35 percent) and they hauled in 25 defensive boards. Ryan Evans sparked the Badgers, as he scored 10 points, pulled down eight rebounds, and contributed three assists in the win. The Badgers shot just 37 percent from the field (17-of-46). Wisconsin also got a double-digit performance from Dekker (10 points).

HALFTIME: Wisconsin and No. 14 Minnesota go into the half even at 24, with a standout performance from the Badgers' Ryan Evans, who scored eight point and grabbed five rebounds. The two teams struggled early on from the field, going the first nine minutes without a two-point bucket. They did combine for five 3-pointers during the span, however, as Minnesota jumped out to a 9-6 lead. Sam Dekker came off the bench and provided an immediate spark for the Badgers, scoring eight points on a 3-of-4 effort from the field. Andre Hollins has a game-high 11 points for Minnesota, while Maverick Ahanmisi chipped in six off the bench.