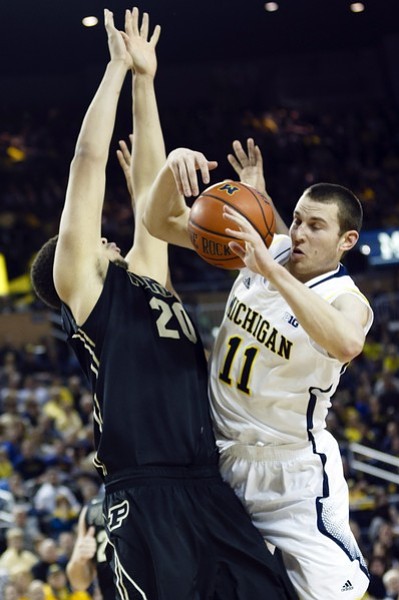 Trey Burke had 15 points and eight assists and gave No. 2 Michigan a boost on defense, helping the Wolverines shake free of Purdue in the second half for a 68-53 win Thursday night.

Tim Hardaway Jr. added 13 points for Michigan, which has a chance to move to No. 1 in the next AP poll if it can win at Illinois on Sunday. Duke, the current top-ranked team, lost Wednesday.


FINAL: In a game with several lead changes and momentum swings, No. 3 Michigan prevailed over Purdue 68-53 on Thursday at Crisler Center in Ann Arbor. There were 15 lead changes in the game. Glenn Robinson III picked up the offensive burden for Michigan (18-1), finishing with 12 points, eight rebounds, and 4-of-6 shooting from the field. When the second frame got underway, the Wolverines took control of the game.

Trailing 36-34 early in the second half, Michigan went on a 19-6 run to seize an 11-point advantage in the middle of the second half. The Wolverines hit 49 percent of their field goals (27-of-55). Michigan shot 7-of-16 from three-point range during the game, good for 44 percent. The Wolverines grabbed 13 offensive rebounds. Michigan also got double-digit efforts from Nik Stauskas (12 points), Tim Hardaway Jr. (13 points), and Trey Burke (15 points).

D.J. Byrd scored 11 points, corralled six rebounds, and dished out three assists for Purdue (10-9) in the loss. The Boilermakers shot just 39 percent from the field (21-of-54). Purdue also got double-digit games from Rapheal Davis (10 points) and Terone Johnson (14 points).

HALFTIME:  A close first half that saw the lead being switched eight times ended with Purdue taking a 33-32 lead over No. 3 Michigan. After already giving up nine offensive rebounds to the Wolverines, the Boilermakers will have to keep Michigan off the boards in the second half. Purdue made it rain from long range by shooting 50 percent (7-of-14) from three-point land. After already giving up eight offensive rebounds to the Boilermakers, the Wolverines will have to keep Purdue off the boards in the second half.

The Boilermakers moved the ball in the first half, accounting for nine assists on 13 field goals. Eight Purdue players have scored. Michigan's Glenn Robinson III had a big first half with six points and five rebounds. D.J. Byrd is putting together a nice game as the Purdue senior has 11 points, four rebounds, and three assists.