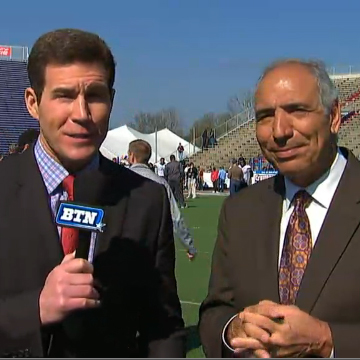 BTN is at the Senior Bowl tracking the progress filing reports on a number of players. In their latest report, Rick Pizzo and Gerry DiNardo focused on two defensive lineman: Illinois' Michael Buchanan and Penn State's Jordan Hill.

The Senior Bowl game is Saturday at 4 p.m. ET on the NFL Network. Get more info at SeniorBowl.com. For NFL Draft information, check out NFL.com.

In the video below, Pizzo and Russ Lande discuss the relatively unknown Big Ten name that has stood out so far at the Senior Bowl: Illinois G Hugh Thornton.

In the video below, Michigan's star quarterback Denard Robinson is attempting to play receiver during the Senior Bowl as he hopes to impress the recruiters for NFL Draft.