Who would you pick to take the last shot? 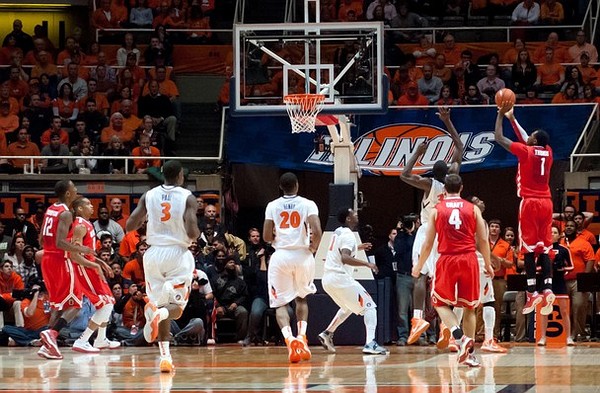 Your team has the ball and is trailing by two points with less than 10 seconds to play. Who do you want to take the last shot? It?s no time for the faint at heart or the timid. Nope. This is the time for the clutch players with ice in their veins to step up.

Here?s my look at the seven players who I would want to take that critical shot.

1. Deshaun Thomas, Ohio State. The guy is the best pure scorer in the Big Ten with seemingly limitless range-witness a league-high 20.5-scoring average. And check out his 41.9 shooting percentage from three-point range. Plus, the 6-7 junior brims with confidence and is fearless with the ball in his hands, able to shoot over foes or drive by them.

2. Trey Burke, Michigan. Yes, his last-second shot at Ohio State rimmed out. Still, Burke is a deadly shooter who also can put the ball on the floor and create his own shot with deft quickness and a wicked first step. The sophomore sensation is tied for second in the league with an 18.0-point average and hits 40 percent from long range.

3. Brandon Paul, Illinois. The 6-4 senior will take some poor shots at times. Still, Paul has a shooter?s mentality and a short memory. Who can forget his 43-point barrage vs. Ohio State last season? On that night, Paul hit 11-of-15 shots-and 8-of-10 from three-point range. That?s what this guy is capable of on any given night, as he is tied for second in the Big Ten in scoring with an 18-point average.

4. Jordan Hulls, Indiana. Is there a better pure shooter in the nation? I think not. The savvy senior paces the Big Ten in three-point shooting percentage at 51.2 percent. Need I say more? No, Hulls isn?t the quickest player, but if he can rub off a pick, catch and shoot, Mr. Hoosier is deadly.

[WATCH: We profile famous Big Ten buzzer beaters in "I Hit It To Win It." ]

5. Andre Hollins, Minnesota. The 6-1 sophomore really emerged down the stretch last season in leading the Golden Gophers to the NIT title game. He also showed his scoring prowess in a 41-point effort earlier this season against Memphis. He?s shooting 42.9 percent from beyond the arc and is averaging 14.3 points.

6. Tim Hardaway, Jr., Michigan. Hardaway has had a tendency to take some bad shots, especially early in his career. He shot 42 percent as a freshman and 41.8 percent as a sophomore. But this year, Hardaway is draining 48.5 percent of his shots. And he has improved his three-point percentage from 28.3 last season to 39.3. The guy is a cold-blooded shooter with limitless range.

7. D.J. Byrd, Purdue. The 6-5 senior can go through some extended stretches of poor shooting, clanking shot after shot from miles away. But, when Byrd is on, there are few better. And he was on against West Virginia on Saturday, hitting 4-of-6 from three-point range en route to 17 points. Byrd also showed his magic at Clemson earlier this season with a 6-of-11 performance from beyond the arc for a season-high 22 points.

Now it's your turn. If you choose to write in another name, it will be categorized as "Other." If we get a significant number of votes for a write-in candidate, we'll update this post later on.

Update from BTN.com editors: The readers have spoken with a strong write-in campaign, and Michigan State's Keith Appling got plenty of support from his fans to garner roughly 50 percent of the overall vote. Great stuff, and thanks for voting.