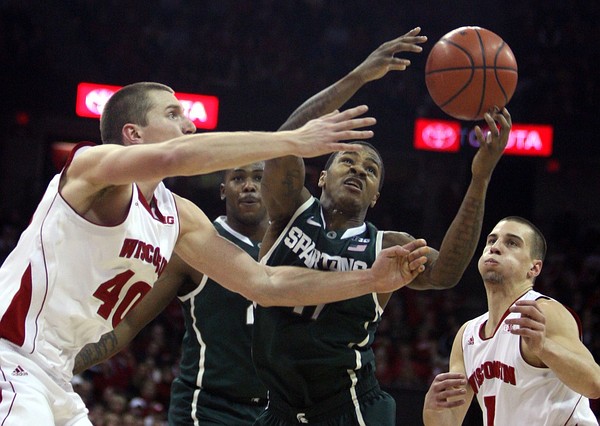 Michigan State won a battle of attrition in frigid Madison, edging Wisconsin by a 49-47 score. The Spartans are now 5-0 in games decided by three points or less, and this win was especially fortunate. The Badgers did an excellent job on defense, forcing Michigan State to take an abnormally high proportion of two-point jumpers:

For the season, the Spartans dedicate only 33 percent of their shots to two-point jumpers, as they are usually able to get ample opportunities at the rim. Wisconsin shut that down, thanks in no small part to the shot-altering prowess of Jared Berggren. Michigan State, normally a mediocre team from distance, made four of nine threes to boost its otherwise chilly night. All things considered, Wisconsin defended plenty well to get the win.

On the other end, however, the Badgers had their own shooting problems against a stout Spartans defense:

Still, even with all the missed threes (8-of-27), Wisconsin should have won this game. It was Michigan State's free-throw defense that ultimately prevailed, as the Badgers shot just 7-of-18 from the stripe (39 percent). If Bo Ryan's team shoots just a little over 50 percent on free throws, the Spartans lose. That is dumb luck.

None of this is to say that Tom Izzo doesn't have a good team on his hands–he clearly does. It's just that the Spartans probably aren't as good as their 6-1 conference mark. A big opportunity to prove me wrong comes this Sunday as Michigan State visits Indiana–a win in Bloomington removes any doubt that the Spartans are truly a Big Ten title contender.

Illinois seemingly got back on track with a 20-point win at Nebraska, though it's not clear that this was a true return to form for the Illini. D.J. Richardson had a career night, scoring 30 points on just 14 shots, while the rest of the team went one for 13 from three (the make came from deep reserve Mike Shaw during mop-up time). Illinois did show improved ball movement for stretches of this game, and the rebounding effort was encouraging, but it's hard to know if any of this will carry over to a legit opponent. Sunday's hosting of Michigan will provide a quick answer, as the Illini enter a brutal five-game stretch in which they must go at least 1-4 to keep any tournament hopes alive.

Ohio State jumped out to a big lead over Iowa and held off a late surge to secure the home win. The Buckeyes have now held four straight Big Ten opponents under a point per trip, and the battle for the conference's best defense is convalescing around Ohio State and Wisconsin. Aaron Craft was a catalyst, collecting four steals, though it was the Buckeyes' field goal defense that really made the difference. The Hawkeyes shot just 36 percent on twos and were unable to take advantage of a surprising number of offensive rebounds. It also didn't help that they bricked free throws (13 of 26), though a more typical percentage at the line probably still wouldn't have been enough to change the result.

Tonight, it's another Wednesday doubleheader on BTN, starting with the 6pm CT tip of Penn State at Indiana. This is the most lopsided on-paper matchup of the conference season, so consider it a moral victory if the Nittany Lions are able to stay within 20. At 8pm CT, Minnesota visits Northwestern. Watch the Gophers work the offensive glass in this one–things could get out of hand quickly if the Wildcats can't end possessions.