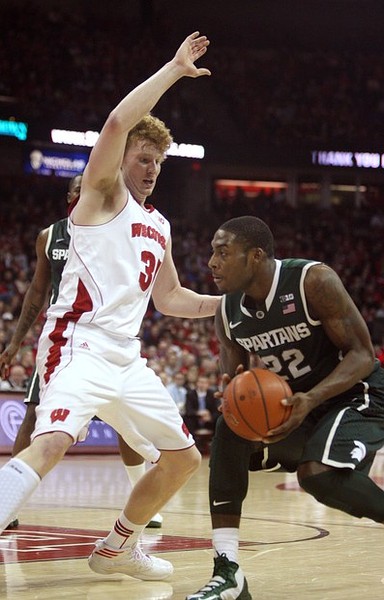 Both teams went more than 4 minutes without scoring down the stretch. Dawson broke the drought, hitting one of two from the free throw line to put the Spartans (17-3, 6-1) up 48-44 with just over 2 minutes left.

Ryan Evans' 3-pointer from the wing with 17 seconds left pulled Wisconsin within 48-47.

Michigan State freshman Gary Harris was fouled and hit front end of a 1-and-1, but rimmed out the second, leaving Michigan State up 49-47.

FINAL: No. 11 Michigan State held Wisconsin to 16-of-54 shooting, as defense led the Spartans to a 49-47 victory on Tuesday at the Kohl Center in Madison. Branden Dawson picked up the Spartans with a career-high 18 points and 13 rebounds. There were nine lead changes in the game. Michigan State shot just 38 percent from the field (18-of-48). The Spartans also got a double-digit game from Keith Appling (19 points). Mike Bruesewitz had 10 points and hauled in seven rebounds for the Badgers in the game. Wisconsin was able to secure 22 offensive boards.

HALFTIME: While Branden Dawson had a strong first half, Wisconsin leads No. 11 Michigan State, 28-27, at the half. In the first 20 minutes, Dawson scored 11 points and grabbed eight rebounds. The Badgers led 19-12 when they went the next 3:07 without scoring to allow the Spartans to tie the game 19-19 with a 7-0 run in the first. Wisconsin's Jared Berggren put together a solid all-around half, with six points, three rebounds and three assists.