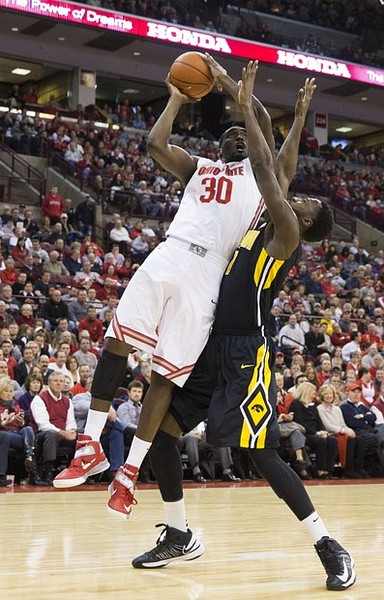 Deshaun Thomas, who missed part of the second half with a cut above his eye, scored 16 points and No. 15 Ohio State built a big lead and then held on to beat Iowa 72-63 on Tuesday night. Thomas, the Big Ten's leading scorer at 21 points per game, sat out about 3 minutes while an open cut over his right eye was bandaged.

[ VIDEO: Watch Aaron Craft leap over first row in attempt to save ball ]

Check out Aaron Craft's effort and athleticism on this play:

Check out this rare And-1 opportunity:

Eric May slams it home:

FINAL: Deshaun Thomas scored 16 points and pulled down seven boards to lead No. 15 Ohio State to a 72-63 win over Iowa on Tuesday at Value City Arena. The Buckeyes led 21-18 with 6:22 to go in the first half before they widened the margin to 16 points with a 17-4 run that ended with 18:17 in the game. Iowa (13-6) struggled shooting the ball in the game, particularly from the free-throw line, where it shot 50 percent (13-of-26). LaQuinton Ross shot 3-of-5 from the field and scored seven points for Ohio State. The Buckeyes shot 52 percent from the field (27-of-52). Ohio State was tough on the offensive boards, grabbing 12. The Buckeyes also got double-digit performances from Evan Ravenel (11 points) and Lenzelle Smith, Jr. and Aaron Craft, who each scored 12.

HALFTIME: No. 15 Ohio State closed the first half strong, using a 13-4 run late in the frame to take a 34-22 lead over Iowa into the locker room. Lenzelle Smith Jr. paced Ohio State with eight points, while LaQuinton Ross added seven and five rebounds. Iowa's Melsahn Basabe had a big first half, with four points and seven rebounds. The Buckeyes and the Hawkeyes traded the lead eight times before Ohio State seized control with its late run. Iowa's Devyn Marble (3 points) and Ohio State Deshaun Thomas (5 points) each had a tough first half. Marble, in fact, hit just 1-of-6 shots.