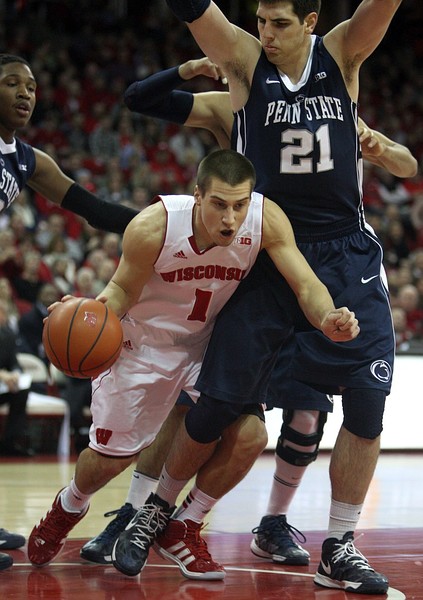 This is a big week in Wisconsin hoops, with a visit from Michigan State tonight following by a visit from Minnesota on Saturday. That?s why I?m gonna begin daily links with the Badgers.

Yes, Wisconsin is coming off a loss at Iowa-its first in Big Ten action–but it?s almost unbeatable in the Kohl Center. Sorry, Spartans. Check it out: The Badgers are 86-9 at home under Bo Ryan. However, word of caution: Big Ten teams are just 16-16 at home in league action this season. And the Spartans won at Wisconsin for the first time since 2001 last season, when the Badgers lost three at home. Wisconsin has one defeat in Kohl this year: to Virginia. This is gonna be fun tonight in Madison.

Iowa?s Aaron White is eager to play at Ohio State tonight in a homecoming game from the Strongsville, Ohio, native. You see, the Hawkeyes didn?t play in the Buckeye State last season, so this is White?s first trip back as a Hawkeye.

Speaking of Iowa, the team wanted to honor the late Chris Street during its game vs. Wisconsin on Saturday by wearing his name on the back of their jerseys. But, the NCAA put the kibosh on the idea.

As Mike Hlas of the Cedar Rapids Gazette says: The NCAA says it?s OK for Iowa (or anyone else) to have Nike swooshes on its basketball uniforms. But to have all the Hawkeye players wear the name ?Street? on the back of them for one night only? That was taboo.

Don?t look now, but Purdue may be rounding into form.

The Boilermakers still are a young team whose better days are ahead. After all: Purdue has six freshmen and six sophomores. But the team has won three in a row and has a bit of swagger as it begins a big week with a game at Michigan on Thursday and visit from Iowa on Sunday. Matt Painter?s promising team must get a split.

On the subject of Purdue, coach Matt Painter said he recruited Michigan?s Glenn Robinson III-son of ex-Boilermaker great and 1994 consensus national player of the year Glenn Robinson-but ran out of scholarships.

What? If I?m Painter, I find ANY way possible to find a scholarship for the kid.

"We recruited him, and we actually ran out of scholarships," Painter said on a Monday teleconference. "We really liked him, and he was a good player. He really made strides from that sophomore to that junior year. Now going to Michigan in their system, he definitely fit. He's a great kid. He's really worked hard. He has a good feel and knows how to play.

"I obviously played college basketball with his dad (in 1992-93), but it never really matriculated to that point."

The fall of Illinois has been swift and decisive, from a 12-0 start, lofty ranking and ?national darling? status to the reality of going 2-5 in the last seven games. First-year coach John Groce hopes the bleeding of a three-game losing skid is done.

How bad has it been? There has been a 17-point loss at Minnesota, a 23-point defeat at Wisconsin and a 14-point setback at home to Northwestern the last three times out. Up next: a game at Nebraska, the site of the Illini?s most embarrassing loss last season-an 80-57 whipping for an Illinois team that lost 12 of its last 14 Big Ten games.

Brian Rosenthal of the Lincoln Journal Star offers up his weekly power rankings. Yes, Michigan is on top.

It?s no secret: The Big Ten is loaded with hoop talent. The NBA knows that. Here?s a look at where NBADraftnet.com has some of the Big Ten players slated to go.

By the way: Michigan has three projected first-rounders.

It?s good to be Ohio State coach Thad Matta. Not only does he have a great job, but he also just got a raise to $3.2 million per season.

Matta deserves it. In his ninth season with the Buckeyes, he has so won five Big Ten titles, been to four Sweet Sixteens and twice played in the Final Four. He is 234-69 at Ohio State, a .772 winning percentage. Yes, pretty good.

Speaking of Ohio State, the quest for a scoring complement to Deshaun Thomas continues. This is getting old, isn?t it?

The loss at Michigan State over the weekend was a prime example on much Thomas is a one-man show. He had 28 points; the rest of the team had 28 in a 59-56 loss. Players like Lenzelle Smith, Jr. LaQuinton Ross and Sam Thompson must step up. Another area of concern is the pivot, where Amir Williams, Evan Ravenel and Trey McDonald are combining for only 11.2 points and 7.6 rebounds a game in the Big Ten.

So far, not so good for Michigan?s Denard Robinson in the Senior Bowl. He has struggled as a punt return man and is limited as a receiver by a still-lingering elbow issue. Still, Robinson is projected as high-as a second-round selection. We shall see. I have my doubts. Role players typically aren?t picked that high-and I think that?s all Robinson will be in the NFL.

With Penn State in the midst of NCAA sanctions that include a bowl ban, it will be interesting to see if the school opts to play a marquee road game overseas to act as a de fact bowl. Notre Dame has played Navy in Ireland. Perhaps Penn State could play, say, Army in Dublin, Ireland.

Shavon Shields on if he's become a rock star on campus after his big week: ?I haven?t gone to class yet.? Status is TBD, it appears.

My take: He?s a rock star in my book after that performance last week.

My take: This is quite a compliment. And well-deserved. To me, Appling is the key Spartan. As he goes, Michigan State goes.

My take: Not sure how I feel about this.

#illini Groce on players-only meeting: THat's their meeting. I don't think it's a bad thing. They care. Doesn't surprise them.

My take: A players-only meeting at Illinois. This is a good thing, right?