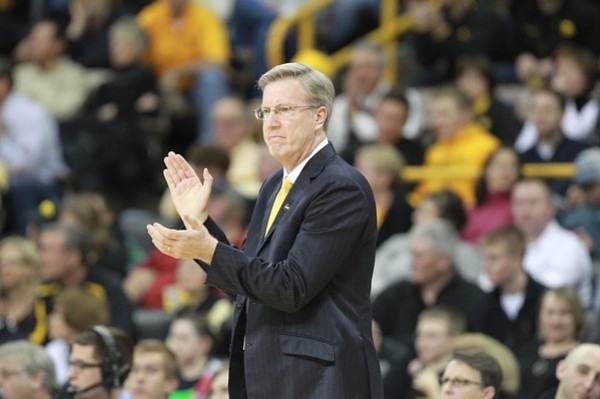 On Saturday, Iowa defended its home court with a win over Wisconsin. The Hawkeyes raced out to a 30-10 lead before the Badgers finally got something going on offense, though I think that early start for Wisconsin overshadows what kind of game this really was.

Both offenses scored over a point per possession, which is a good sign for this Iowa offense that had been struggling somewhat in conference play. Most of the problem can be traced to some awful outside shooting as Iowa has struggled to replace the shooting acumen of Matt Gatens. And Saturday was no different, as the Hawkeyes made just 2 of their 10 attempts from three-point range.

But two things kept the Iowa offense rolling-a lack of turnovers and free-throw shooting. Iowa drew 23 fouls against the Badgers, and made 24-of-29 free throw attempts. Free-throw shooting is an area where Fran McCaffrey?s team excels (currently the best free-throw shooting team in the Big Ten), which indicates that it?s only a matter of time before the Hawkeyes improve their outside shooting.

Although Iowa sits at just 2-3 in conference play (with tomorrow?s trip to Ohio State looming), there?s a real opportunity for it to go dancing for the first time since 2006. The Hawkeyes still have 5 games remaining against Penn State, Nebraska, and Northwestern, as well as home games remaining against Purdue and Illinois. If Iowa simply wins those games (and it should be favored in each of those matchups), the team will finish the season at 9-9, which is a virtual lock to make the Dance.

You have to admire the job that McCaffrey?s done in turning this program around. When he was hired, the team was coming off a 4-14 season, and to make matters worse, was losing several players to transfer and other off-court issues. Thus, the first thing the coach had to do when he got the job was simply find enough bodies to field a team in the short term. What?s noteworthy, however, is that the large freshman class that McCaffrey welcomed in his first season as head coach now makes up the core of this revamped Hawkeyes squad. That?s not always how these rebuilding projects go. Last year?s Indiana team did not feature the likes of Malik Story, Nick Williams, and Bobby Capobianco, after all.

Michigan State raced out to a 13-2 lead over Ohio State, but it was a seesaw battle for the rest of the way. In the end, though, the Spartans held on after Shannon Scott threw up a puzzler of a final shot. It sounds as if Scott thought he might be fouled by the Spartans, as they were protecting a three-point lead at the time. Thus, Scott wanted to be sure that any foul would result in three free-throw attempts. That?s all well and good, except the foul never came, and Scott?s attempt did not threaten to hit the rim. Deshaun Thomas didn?t sound too happy that he didn?t get a chance to add to his 28-point total, reminding reporters that ?I was knocking down shots all night.?

That, no one can deny. Thomas scored his 28 points on 20 shots, and even more impressive, turned the ball over just once despite consuming so many possessions. But as this team has shown over and over again this season, an offense that lacks efficient complementary parts is not going to be very good, despite how good its best player is. The rest of the team scored 28 points combined, and it took them 27 shots to get there (and they committed 13 turnovers as well). In sum, the Buckeyes managed just 0.93 points per possession.

The line of the night for the Spartans probably goes to Adreian Payne, who scored 14 points on just 6 shots, and also pulled down five boards. Tom Izzo played just 8 players in this game, and Matt Costello received just five minutes, so it was really more of a seven man rotation. It seems like Izzo just might be eschewing depth and depending more on his starters this season.

Penn State seemed allergic to victory on Saturday, allowing Nebraska to pick up a road win. The Nittany Lions missed five free throws in the final 24 seconds to allow the Huskers to hang on to the win. By contrast, Nebraska made every single one of its 16 free-throw attempts. Shavon Shields led the way with 29 points on 11 shots, though he did turn the ball over 6 times as well. After going scoreless in the first half, Jermaine Marshall finished with 18 points on 16 shots.

Northwestern only made things slightly interesting in a home loss to Indiana, when it pulled within six points of the Hoosiers with about seven minutes left. But Indiana made its free throws down the stretch, and the Hoosiers picked up another road win, their third on the Big Ten season. That said, conference play might be exposing some cracks in IU?s defense. In each of the last three games, Indiana?s opponent has scored well over a point per possession, something that only happened twice in the non-conference season. It?s probably no coincidence that those two games were against Georgetown and Butler. In the former game, Indiana had to win in overtime, and of course the Hoosiers dropped the latter. The moral of the story is that when the Hoosiers defend well, they?re probably unbeatable. But they?re susceptible to bad defensive performances.

The good news is that even when the team isn?t defending particularly well, they?ll usually still win. That offense is tough to stop, something the Wildcats are aware of after the Hoosiers torched them for 1.24 points per possession. Cody Zeller spearheaded the attack with 21 points (11 shots) and 13 rebounds. Reggie Hearn led the way for Northwestern with 22 points.

Finally, Purdue beat up on a bad West Virginia team in a late non-conference matchup. This game was never remotely interesting, as the Boilers grabbed control out of the gate and never looked back, pushing the lead to as much as 32 points in the second half. Raphael Davis responded well to being inserted into the starting lineup, scoring 16 points on just 6 shots. D.J. Byrd also had a nice game with 17 points on 8 shots.

We?re just about a third of the way into the conference season, but already we have some teams that are nearing critical junctures of their season. Both Michigan State and Wisconsin need to keep winning to have a chance at the conference title, but only one of them will keep pace on Tuesday when the Spartans visit Madison.

Illinois probably has to win at Nebraska that evening as well, if it intends to get an at-large bid this season. The good news is that Nebraska?s offense is good medicine for a struggling defense, as the Huskers score the fewest points per possession in the Big Ten. There?s probably a variety of reasons for that, but one of them has to be the fact that only eight teams in all of Division I attempt fewer shots at the rim than Nebraska, and similarly only eight teams attempt more two-point jumpshots than the Huskers (via hoop-math). This is a mid-range offense that isn?t very good at making them. The moral is that if Illinois can?t stop Nebraska from scoring, it might not be able to stop anyone. Of course, the same could have been said about Illinois? offense against Northwestern, and that did not turn out so well for the Illini.