Zeller, No. 2 Indiana fend off Northwestern 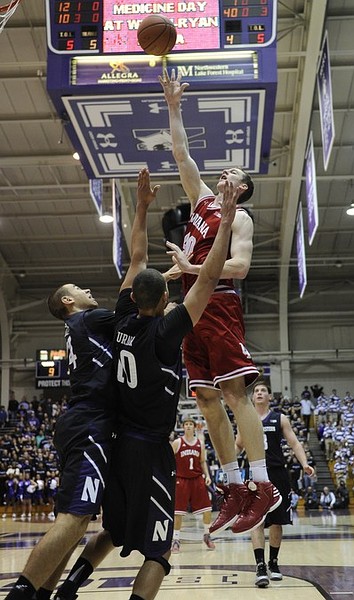 Cody Zeller scored 21 points and grabbed 13 rebounds, and No. 2 Indiana beat Northwestern 67-59 on Sunday. Jordan Hulls added 15 points, Christian Watford 14, and the Hoosiers (16-2, 4-1 Big Ten) hung on after things got tense down the stretch.

They led by as much as 17 in the first half and were up 31-17 at intermission, but Northwestern (11-8, 2-4) rattled them with its trap in the second. The Wildcats pulled within five three times, but the Hoosiers prevailed after seeing a six-game win streak end with a loss to Wisconsin last week.

Reggie Hearn scored 22 for Northwestern, which refused to go away quietly in this one after beating No. 23 Illinois on Thursday.

Cody Zeller tips it back in:

FINAL: Cody Zeller scored 21 points and grabbed 13 rebounds to lift No. 2 Indiana to a 67-59 win over Northwestern on Sunday at Welsh-Ryan Arena in Evanston. Christian Watford shot 3-of-5 from the field and scored 14 points for Indiana (16-2). The Hoosiers hit 47 percent of their field goals (20-of-43) and grabbed 14 offensive rebounds. Indiana also got a double-digit performance from Jordan Hulls (15 points). Reggie Hearn contributed 22 points, grabbed three rebounds, and knocked down 7-of-11 shot attempts for Northwestern (11-8) in the loss.

HALFTIME: There were no free points for Northwestern, as No. 2 Indiana clamped down defensively to hold the Wildcats to 30 percent shooting in the first half and has a 31-17 lead going into the break. Trailing early in the game, Indiana used a 10-0 run to blow past the Wildcats and take a 13-4 lead. The Hoosiers dominated on the glass in the first half, outrebounding Northwestern 22-13, including an 8-3 advantage on the offensive glass. Indiana's Christian Watford paces all scorers with 11 points, while Jordan Hulls and Cody Zeller each added seven for the Hoosiers. Reggie Hearn scored nine points for Northwestern.