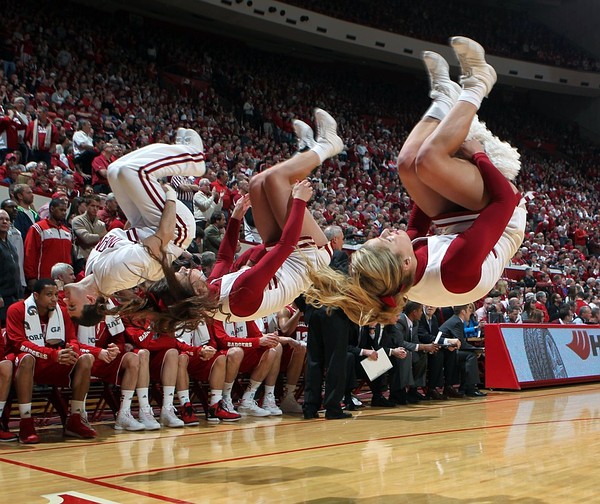 What kind of week has it been in the Big Ten? With Northwestern winning at Illinois on Thursday, road teams have won six of the nine games this week. And we still have Saturday to go. Are you listening, Iowa and Michigan State? Wisconsin plays at Iowa while Ohio State plays at Michigan State in two big games on Saturday. If the Badgers and Buckeyes can continue the trend of road teams winning, it will be impressive.

Wisconsin is coming off a huge victory at Indiana on Tuesday, while Ohio State hasn?t played since giving Michigan its first loss last Sunday while playing in Columbus.

Here?s a look forward and back at the week in the Big Ten in my weekly Three-Pointers.

THREE STOCKS TO BUY
1. Wisconsin. The Badgers are unranked-but in first place. It has been a remarkable ride for Bo Ryan?s crew which has ripped off seven wins in a row. And none have been bigger than the 64-59 triumph at No. 2 Indiana on Tuesday.
2. Michigan. Yes, the Wolverines lost 56-53 at Ohio State on Sunday, failing to dig out of a big early hole. But Michigan rebounded to score an impressive 83-75 victory at No. 9 Minnesota that was one of the best wins by any Big Ten team this season. The Wolverines freshmen looked impressive in the win over the Golden Gophers. Did you see that 360-degree dunk by Glenn Robinson III? Whoa!
3. Ohio State. That ugly 74-55 loss at Illinois seems like eons ago, doesn?t it? Since then, the Buckeyes have won at Purdue and vs. Michigan. This team may be hitting its stride with a big game at Michigan State on Saturday. Is Deshaun Thomas the best player in the conference? Hmmm.

THREE STOCKS TO SELL
1. Minnesota. Hold up on printing those ?Big Ten champs? T-shirts. The Golden Gophers have lost two in a row, falling at Indiana on Saturday and at home to Michigan last night. In each game, Minnesota fell behind big after a slow start, rallied, but came up short. The loss last night in the raucous Barn was especially disheartening. But, there?s still plenty of time-and big games-left.
2. Illinois. This team started 12-0. Since then, the Illini have gone 2-5. The latest setback was a deflating home loss to Northwestern, Illinois? third defeat in a row. This team lacks toughness, rebounding muscle and interior scoring. And the offense seems out of synch and still relies on too many three-point shots. Is this still an NCAA team?
3. Penn State. The Nittany Lions are trying to be resourceful without Tim Frazier, as players like D.J. Newbill and Jermaine Marshall are stepping up. But, it?s a challenge. Penn State has lost five in a row. A visit from Nebraska this Saturday may be the Nittany Lions? best chance for victory. Lose this game, and Penn State may be staring at a winless Big Ten season.

THREE THINGS I LEARNED
1. Wisconsin is legit. At the start of the week, there were six ranked Big Ten teams in the AP poll: No. 2 Indiana, No. 5 Michigan, No. 9 Minnesota, No. 11 Ohio State, No. 18 Michigan State, No. 23 Illinois. Alas, the unranked Badgers are the lone unbeaten team in Big Ten action-and are in first place. A big key has been the emergence of Traevon Jackson at the point.
2. Purdue will keep getting better. This team suffered some vexing non-conference losses to the likes of Eastern Michigan, Villanova and Oregon State. But the Boilermakers are continuing to improve with the freshman inside-outside tandem of A.J. Hammons and Ronnie Johnson. A big key: D.J. Byrd must hit shots.
3. Nebraska is going to beat someone it?s not supposed to beat. Yes, Tim Miles? squad is short on talent. But, it?s long on effort and they're well-coached. The Huskers have looked good in some losses (Wisconsin, at Michigan State). Once they get big man Brandon Ubel back from an elbow injury, it will help the Cornhuskers, who have some talent in Dylan Talley, David Rivers, Shavon Shields and Ray Gallegos, who never has met a shot he didn?t like.

THREE IMPRESSIVE WINS
1. Michigan 83, Minnesota 75. The No. 5 Wolverines went into a hostile environment in the Barn and came away with an impressive win over the No. 9 Golden Gophers by shooting lights out (over 54.9 percent overall; 50 percent from three-point range). Trey Burke showed why he?s one of the nation?s top point guards in tallying 18 points with nine assists and one turnover. And Michigan answered the call on the interior, showing toughness and grit.
2. Wisconsin 64, Indiana 59. The Badgers controlled the pace-and won the game vs. the No. 2 team in the nation. It was a thing of beauty. This was Wisconsin?s fifth victory in succession in Assembly Hall, and its 11th win in a row over Indiana. Good news for the Hoosiers: They don?t have to play at Wisconsin this season.
3. Ohio State 56, Michigan 53. This was a statement game for the Buckeyes, who needed to notch a quality victory. Well, this was it over the No. 2 team in the nation. And it came vs. their rival, no less. If Ohio State keeps getting scorers like Sam Thompson and Lenzelle Smith, Jr., to help Deshaun Thomas carry the load, this team could be a very good even without Jared Sullinger.

[ENTER TO WIN: The Buffalo Wild Wings Trip to the Tournament Sweepstakes. ]

THREE GAMES TO LOOK FORWARD TO
1. Ohio State at Michigan State, Sat., Jan. 19. The Buckeyes have lost at Illinois and won at Purdue. But this trip to East Lansing will be unlike either of those two tilts. The Spartans have won four in a row since opening Big Ten play with a loss at Minnesota. This is a tough, physical Michigan State team that will test Ohio State big men Amir Williams and Evan Ravenel, who will be pressed to matchup with Derrick Nix and Adreian Payne.
2. Wisconsin at Iowa, Sat., Jan. 19. The Hawkeyes beat the Badgers twice last season. Look it up. Iowa ended a three-game losing skid with an impressive rout of Northwestern in Evanston on Sunday. But the Badgers are the hottest thing going in the Big Ten as I type this, having won seven in a row and bursting with confidence coming off that victory at Indiana on Tuesday. Which team can control the pace? Wisconsin wants to slow it down; the Hawkeyes wanna push it.
3. Michigan State at Wisconsin, Tues., Jan. 22. These teams played a doozy last year in Madison, when Ryan Evans apparent game-tying last-second three-point heave was waved off to allow Michigan State to escape with a 63-60 overtime win. The Badgers have seen Indiana and Minnesota fall at home this week. Heck, they beat the Hoosiers. Will Wisconsin be the next top Big Ten team to fall on its turf? The Spartans lost at Minnesota to start Big Ten play but later won at Iowa. Expect a physical game.