No. 5 Wolverines win battle over No. 12 Gophers 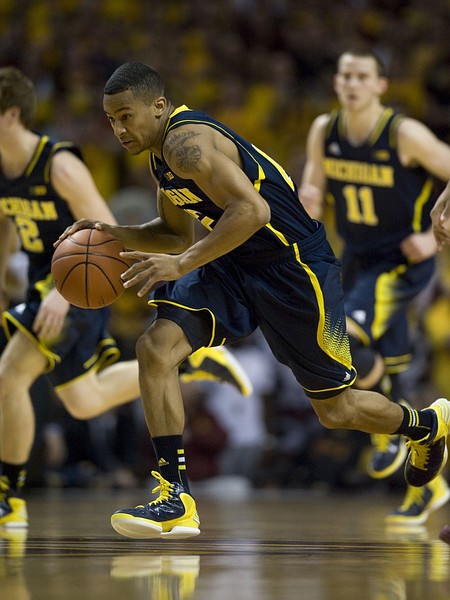 Tim Hardaway Jr. scored 21 points and Trey Burke had 18 points and nine assists to help No. 5 Michigan stave off No. 12 Minnesota 83-75 on Thursday night.

Hardaway hit four 3-pointers in the first half for the Wolverines (17-1, 4-1 Big Ten), who had the lead for the final 33 minutes of the game and finished with 13 steals to fuel their fast break. Nik Stauskas added 11 points.

Tim Hardaway Jr. sparked Michigan, as he contributed 21 points, grabbed four rebounds, had three assists, shot 7-of-8 from the field, and shot 4-of-5 from long range in the victory. The Wolverines also got double-digit contributions from Nik Stauskas (11 points) and Trey Burke (18 points). Austin Hollins scored 21 points, pulled down seven rebounds, made 7-of-12 shots from the floor, and went 4-of-7 from beyond the arc for Minnesota in the game.

The Golden Gophers hit 47 percent of their field goals (25-of-53). Minnesota was on fire from beyond the arc during the game, shooting 44 percent (8-of-18). The Golden Gophers were tough on the offensive boards, grabbing 22. Trevor Mbakwe stuffed the statsheet for Minnesota with a double-double. He scored 13 points, yanked down 10 rebounds, and went 4-of-7 from the field. The Golden Gophers also got solid contributions from Rodney Williams Jr. (11 points) and Andre Hollins (13 points). Minnesota lost despite outrebounding Michigan 41-28.

Rodney Williams slams it down.

Austin Hollins cleans up with a dunk.

Glenn Robinson III took it home for a 360-degree dunk at the other end.

Mitch McGary dunks on the Gophers.

Tim Hardaway Jr. with an assist from Trey Burke.