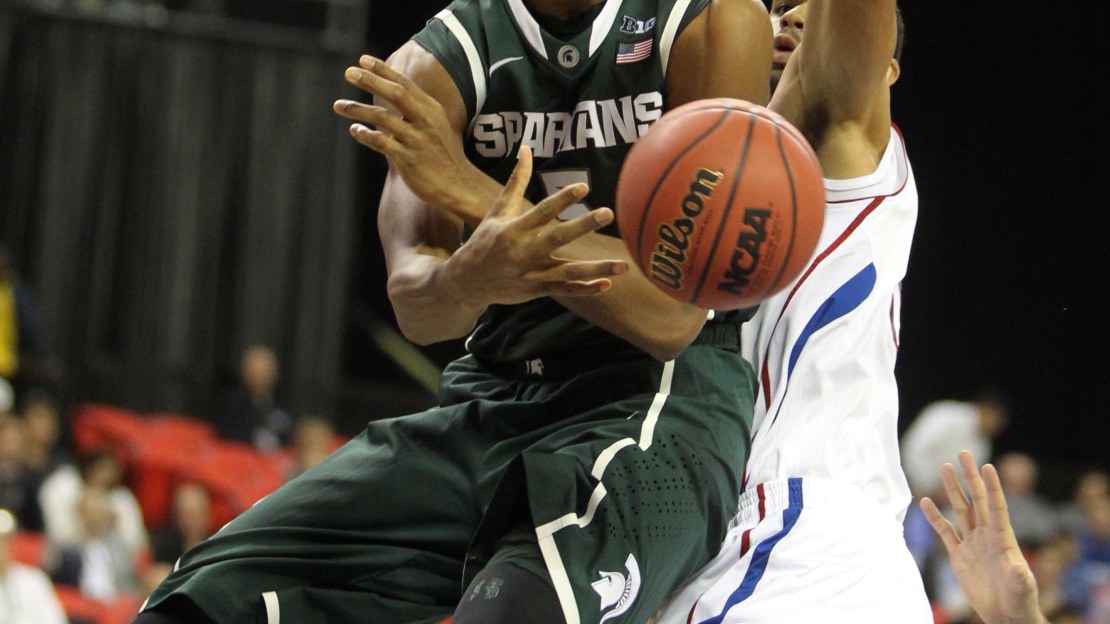 Adreian Payne scored 20 points after spending the first half on the bench following a morning scuffle with teammate Brandon Dawson, and No. 18 Michigan State held on for a 81-72 victory against Penn State on Wednesday night.

Payne, a sturdy 6-foot-10 forward, made up for lost time by dominating the post in the second half. He had 13 points on 5-of-6 shooting in a stretch of six-plus minutes after entering the game with about 16:30 left. Payne added a 3-pointer – only his second made 3 of the year – in the middle of a 20-8 run to help the Spartans (15-3, 4-1 Big Ten) pull ahead midway through the second half.

Penn State (8-9, 0-5) stayed closed much of the night in large part because of Jermaine Marshall, who scored 22 of his career-high 29 points after halftime.

Travis Trice gets the hoop and the harm:

FINAL: Jermaine Marshall led Penn State with 29 points and 10 rebounds, but it was not enough as the Nittany Lions fell to No. 17 Michigan State 81-72 Wednesday at the Bryce Jordan Center in University Park. Adreian Payne and Derrick Nix had good games for Michigan State (15-3). Payne scored 20 points, pulled down six rebounds, and made 6-of-8 shots, while Nix had 12 points, yanked down five rebounds, dished out four assists, and knocked down 5-of-5 shot attempts. The Spartans shot 47 percent from the field (26-of-55). Michigan State shot 7-of-17 from three-point range during the game, good for 41 percent and went 22-of-30 from the charity stripe (73 percent).

HALFTIME: No. 17 Michigan State leads 29-25 over Penn State at the half thanks to a nice start from Gary Harris, who has nine points on 3-5 shooting. The Nittany Lions have been effective inside, making 8-of-15 two-point field goals, but they've hit just 1-of-7 from distance. Meanwhile, the Spartans hit 42 percent (5-of-12) of their three-point attempts and accounted for nine assists on 10 field goals. D.J. Newbill led the way for the Nittany Lions in the first half, with nine points.