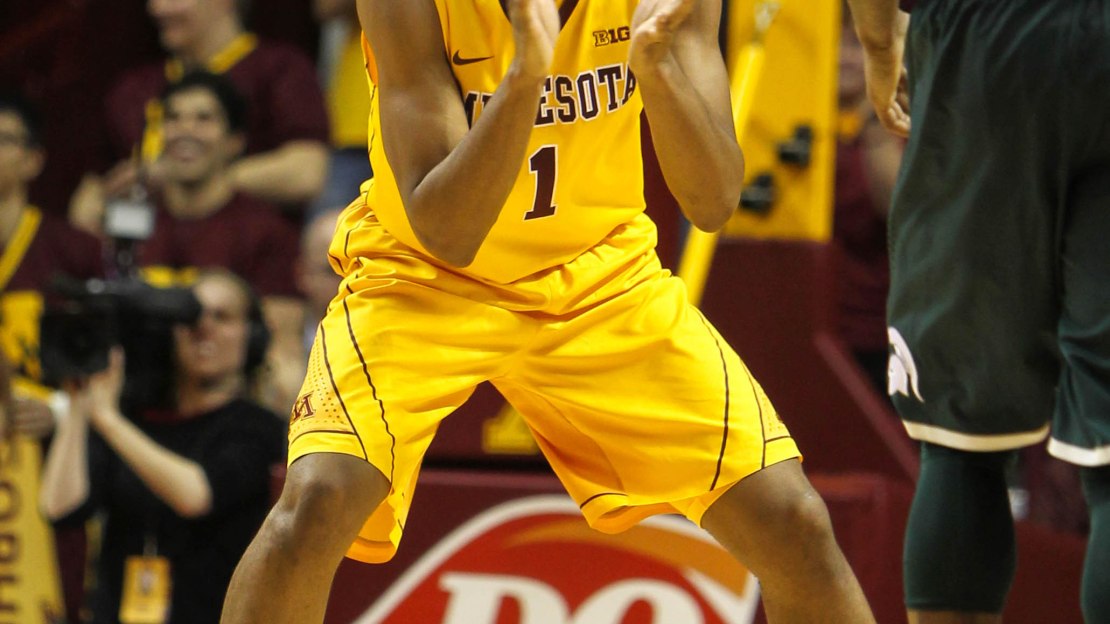 The winner will remain on the heels of Big Ten front-runner Wisconsin. The loser will have two Big Ten losses, shrinking the margin for error as January is about to bleed into February.

Each team is coming off a similar loss, with both rallying from big deficits only to come up short after a furious run (Minnesota at Indiana, and Michigan at Ohio State in what was the Wolverines? first loss of the season).

The matchup within the matchup that many anticipate is Hollins vs. Wolverine point man Trey Burke, who are two of the best in the business.

The two faced off in the Big Ten tourney last season in what was an epic encounter. In the clash, Hollins finished with 21 points, while Burke tallied 30 in a 73-69 Michigan overtime victory in the quarterfinals. Hollins, who moved into the starting lineup for the final 10 games, and the Gophers would go on to lose the NIT title game to Stanford and finish 23-15.

The lessons learned along the NIT trail helped forge this 15-2 and ninth-ranked Minnesota squad, whose only other loss has come vs. Duke. Hollins understands that. He also understands he?s helping Tubby Smith and the Golden Gophers chase history, averaging a team-high 14.4 points, 2.8 rebounds and 3.6 assists as more of a scoring point guard.

Minnesota last won the Big Ten in 1981-82. The Gophers also won the conference in 1996-97 and went to the Final Four but vacated both due to NCAA violations. Hollins wants to help author a new era in the Dinkytown. And he and Minnesota can take a big step toward that on Thursday night vs. 16-1 Michigan.

I caught up with the 6-1, 200-pound sophomore from White Station High in Memphis, as he prepped for Burke and the Wolverines.

Q: What areas do you think you?ve improved at?
A: I think my decision-making. I have a year under my belt at point guard now. I have to make more and more calls and doing what coach wants. That has been key. Just better understanding the position and what is expected of me.

Q: Who has played the biggest role in helping you become a better decision maker?
A: Saul Smith, one of our assistants (and Tubby?s son). He was the point guard at Kentucky. Every day, I always talk to him about the little things that make a point guard, the things I need to do and continue to get better at. The ins and outs of the position. He has made me a lot better because he has played the position and he knows it well.

Q: At what point did you know you could have a good team this year?
A: It started at the end of last season, when we made that NIT run. We lost Ralph Sampson, but we had everyone else back. We knew we were getting Trevor (Mbakwe) back, so I knew we were going to be a good team. We started to gel and play better, we were winning and closing out games. We finished so strong and I felt it would carry over to this year. We have done a good job carrying that momentum over from last year to this year. Q: How important has it been to have Mbakwe back?
A: It has been huge. He?s an impact player, he?s a game-changer. He has been an inside presence we need and he plays good defense, he rebounds extremely well and is a post player we can go to. He?s just an all-around great player.

Q: How valuable is it to have a team that can go 10 deep?
A: It pays off when we want to wear down teams. When we get tired, there isn?t much of a letdown when we substitute. We know the reserves have the same intensity that we do. And if someone gets in foul trouble, we know there is someone else who can come in and play well. Having a deep bench allows us to wear others down.

Q: How did you end up at Minnesota?
A: I was playing in an AAU tourney in Minneapolis when I first started to get recruited by Minnesota. I had a really good tourney and the coaches were there. They started to recruit me after that. I narrowed it down to my final five and I felt Minnesota was the best for me. And I had someone from my hometown already there in Austin Hollins to give me the inside scoop on everything. I just liked everything about it. I liked the coaches and feel of the team. I also had a chance to play with Al Nolen leaving.

Q: What do you recall about playing Trey Burke in the Big Ten tourney last year?
A: He?s quick as lightning. I have to guard the screens much better than I did in the Big Ten tourney. We should have had that game. We had them down nine with four minutes to go. They came back and beat us. We have to contain Burke and keep him out of the lane. And we have to play good sound defense like we have all year.

Q: What else about Michigan impresses you?
A: The way they get out in transition. They shoot the ball well, too. They are just a high-octane offense. They can shoot and take you off the dribble. They spread you out. They are hard to guard. We are up for the challenge. It will be a great game.

Q: We saw Indiana get beat at home on Tuesday by Wisconsin. Does that raise your awareness of how important it is to win at home if you want to win the Big Ten?
A: We know for us to win a Big Ten title, we have to win every game at home. We are gonna have to steal some games away, too. It?s gonna be tough. The Big Ten is a crazy conference. We are gonna have to hold home court tomorrow.