Dawson, Payne put scuffle behind them in road win 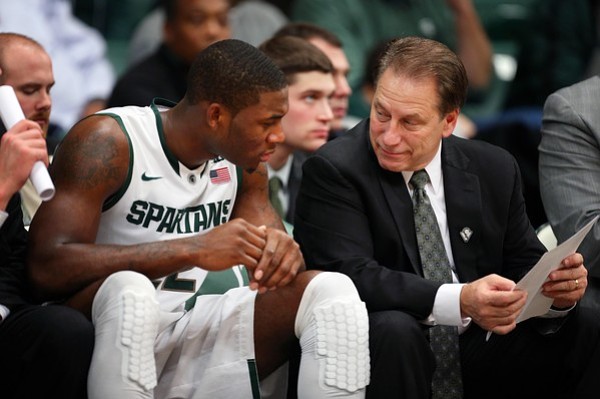 Michigan State basketball players Branden Dawson and Adreian Payne were involved in a scuffle at the team hotel prior to Wednesday night's game at Penn State, and neither started as a punishment. The two players, who happen to be off-campus roommates, entered the game together four minutes into the second half and helped push No. 17 Michigan State past Penn State, 81-72.

Payne, in particular, was a beast when he finally got the call. The junior erupted for a career-high 20 points and six rebounds in 17 minutes. Dawson compiled a nice all-around game, with five points, six rebounds and three assists in 14 minutes.

As expected, the duo received its share of mocking from the Bryce Jordan Center faithful. The fans chanted, "Fight! Fight! Fight!" and, at one point, a couple of fans, dressed as the two players, pretended to fight.

But it was Dawson, Payne and the Spartans who had the last laugh.

Check out some of the guys' highlights from the win:

Adreian Payne had a nice And-1:

And he showed off his long-distance stroke, too:

Dawson elevates for an easy dunk:

Here's what Izzo said earlier in the day in a release:

"A scuffle that began as two players needling each other resulted in a dented wall. We'll deal with this appropriately, and the players will willingly accept responsibility for paying for any property damage. I've spent my entire afternoon meeting with the players involved and they are both sincerely remorseful. What makes matters even more confusing is that they are off-campus roommates. As a result of their actions neither one will start tonight's game."