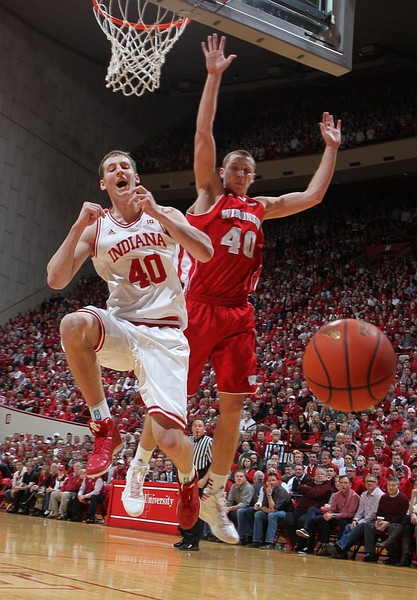 Wisconsin now owns the most impressive result in all of college basketball after its five point win at Indiana. During the Badgers' nonconference struggles, we Geeks wondered what was up with Wisconsin's defense. While the Badgers were still stifling the offense of many a cupcake, they were getting lit up (in a relative sense) against tournament-level teams.

Well, it seems Bo Ryan's squad has figured things out. Prior to last night, Indiana had not scored lower than 1.12 points per possession in Assembly Hall; Wisconsin held the Hoosiers below a point per trip. A large part of that dominance stemmed from a typical strength of Ryan's teams–defending the three-point arc. The Badgers allow opponents to take only a quarter of their shots from three, indicating how few good looks Wisconsin allows its opponents. That perimeter defense befuddled the Hoosiers, and it kept their shooting accuracy low despite a lot of success in getting to the rim:

Normally, when a team manages to dedicate half of their shots to layups and dunks, it is well on its way to a good shooting night. While Indiana did make nearly half of its layups and dunks, the Hoosiers didn't convert at the rim quite as well as they normally do. Some of that was just poor finishing, but Wisconsin also did a very good job of challenging shots at the rim.

Still, Indiana's atrocious shooting on jumpers is what ultimately doomed it. For the season, per Hoop-Math, the Hoosiers are shooting 37 percent on two-point jumpers and 41 percent on threes. Against Wisconsin, it wasn't really a case of Indiana passing up open threes–there just weren't any open threes. Jordan Hulls' night was emblematic, as he found himself forcing tough shots and finishing with just four points and three turnovers.

At the other end of the floor, Wisconsin had an excellent shooting night, especially considering how tough some of their looks were. On a couple occasions in the second half, the Indiana defense kept the Badgers almost entirely on the perimeter, only to be beaten at the end of the possession by a contested jumper. Wisconsin's shot distribution shows that Indiana didn't really defend all that poorly:

Wisconsin did get some open dunks, especially in the first half, but the Hoosiers locked that down in the second half. It was the 50 percent shooting on two-point jumpers had to drive Tom Crean crazy, as several of those makes came with an Indiana defender draped all over the shooter. When you pair this kind of accuracy with the Badgers' usual low turnover rate, you get an output good enough to win.

Wisconsin now sits alone atop the Big Ten standings at 4-0, though the real meat of its schedule is just beginning. The Badgers' next nine games all come against teams currently in the KenPom top 50, though five of those are at home. Improbably, Wisconsin is now a part of the Big Ten title discussion.

As for Indiana, the upcoming schedule offers ample opportunity to take out some frustration, with games against Northwestern and Penn State on tap. The Hoosiers should probably still be considered the favorites in the conference race, but the margin for error just got a lot smaller. If I'm Tom Crean, I'm a bit worried about my team's defense, as both Minnesota and Wisconsin were able to score nearly 1.1 points per trip at Assembly Hall.

Tonight, it's a doubleheader on BTN, starting with Michigan State at Penn State (6pm CT). I maintain that the Nittany Lions will knock off somebody in the Bryce Jordan Center, though I don't expect it to be the Spartans. Watch the rebounding battle in this one, as Penn State is very good on the defensive glass and Michigan State often needs second chances.

At 8pm CT, Nebraska hosts Purdue. This should be an ugly game, as both teams are much better on defense than offense. The interior matchup will be interesting, as two of the conferences biggest men face off  in A.J. Hammons and Andre Almeida. That's nearly 600 pounds of Big Ten goodness.