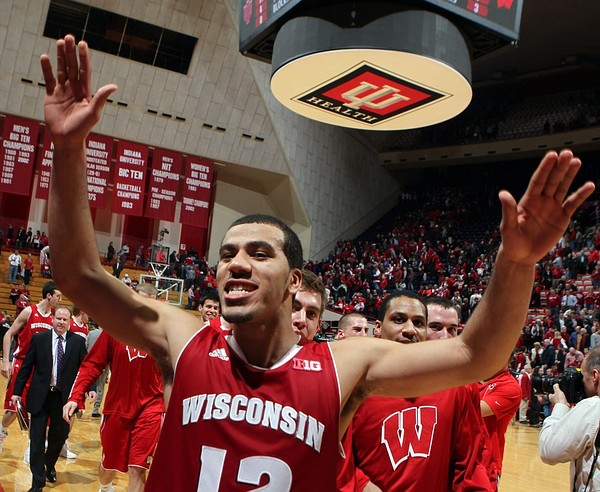 Ryan Evans had with 13 points and seven rebounds, and Traevon Jackson added 11 points as Wisconsin upset No. 2 Indiana 64-59 on Tuesday night to take sole possession of the Big Ten lead. The Badgers (13-4, 4-0) have won seven straight and beaten two Top 15 opponents in four days. They now have 11 straight wins over the Hoosiers and five straight in Bloomington.

Frank Kaminsky almost lost an eye on this one. Seriously.

FINAL: Wisconsin shocked No. 2 Indiana on Tuesday, pulling the 64-59 upset at Assembly Hall in Bloomington. The teams traded the lead nine times in the game. Traevon Jackson's free throw gave Wisconsin (13-4) a 10-point lead midway through the second half, but it nearly threw that advantage away. Ryan Evans sparked the Badgers, as he scored 13 points, hauled in eight rebounds, and went 6-of-11 from the field in the win. Ben Brust was 4-of-7 from the floor and chipped in nine points for Wisconsin. The Badgers also got double-digit performances from Jackson (11 points) and Sam Dekker and Mike Bruesewitz, who each scored 10. Cody Zeller had 23 points, grabbed nine rebounds, and knocked down 9-of-14 shot attempts for Indiana (15-2) in the game

HALFTIME: Cody Zeller was a perfect 8-of-8 from the field and scored 18 points to help No. 2 Indiana take a 32-31 halftime lead over Wisconsin at Assembly Hall. The Hoosiers controlled the boards, outrebounding the Badgers 21-10 in the first half. Each team took a turn in the driver's seat as the lead changed hands six times. Indiana trailed 27-22 when it broke out for a 7-0 run to overtake Wisconsin and seize a two-point lead. Ryan Evans and Frank Kaminsky scored six points apiece to lead seven Badgers in the scoring column. Indiana's Victor Oladipo scored five points and added four rebounds.

Here are some pre-game tweets:

Every seat in the south end zone (the students' section) has a paper cutout on it letting students know it's Will Sheehey's 21st birthday.

May have missed this before, but Jordan Hulls was just announced as a "6-foot graduate student". Haven't heard that before.

The #Badgers 10-game win streak over IU is even more amazing when you consider UW lost 31 straight in the series from 1980-96.

Time to make it 11 in a row against the Hoosiers. That's domination #BadgerNation

IU's senior men's BB players have never beaten Wisconsin. One of only two teams they haven't beaten. The other? They are 0-1 vs. Nebraska.