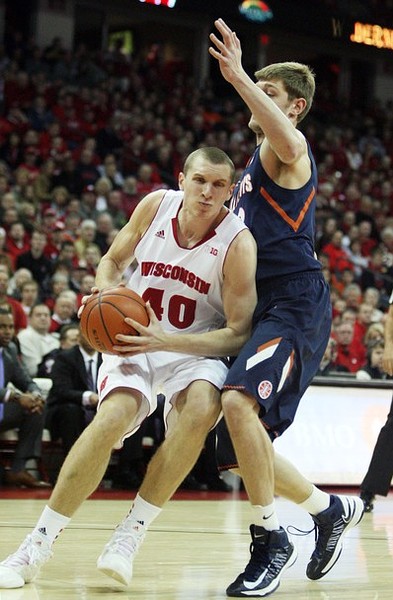 Indiana has a big game tonight with Wisconsin visiting (read the preview here). Will the Hoosiers experience any sort of hangover following an emotional home victory over Minnesota on Saturday? Hmmm. This battle of Big Ten unbeatens seems like a good jumping off point for daily links.

One area to watch for Indiana tonight: The bench. Tom Crean?s crew needs more production from the reserves. How bad was it vs. the Golden Gophers? The Hoosiers? bench notched just three points - all on free throws. That, ladies and gentlemen, must change. And, it likely will when you consider that Indiana?s bench is averaging 25.9 points, second-best in the Big Ten.

If Wisconsin wants to leave Blooming in sole possession of first place, its always rugged defense must be even tighter than ever.

The Hoosiers pace the nation in scoring, averaging 87.9 points and lead the Big Ten in field-goal percentage (51.1), three-point shooting (41.9) and three-throw percentage (73.8).

Minnesota has been good this season. Really good. But, it needs to avoid the slow starts that can plague the Gophers from time to time.

What gives? Tubby Smith says it?s a lack of aggressiveness. Speaking of the Gophers, is there a better home court advantage than Williams Arena (aka The Barn) when Minnesota is rolling? Of course not.

I always appreciate and respect what Lee Barfknecht of the Omaha World-Herald has to say. And so should you. Here are his latest Big Ten power rankings.

Barfknecht has Indiana No. 1. And I?m not gonna quibble with that.

Much has been made about Michigan?s freshmen-and rightly so. Players like Glenn Robinson III, Mitch McGary and Nik Stauskas have excelled. But where would Purdue be without freshmen A.J. Hammons and Ronnie Johnson? Scary thought, huh?

And Raphael Davis also is coming on for a group that the Boilermakers must build around the rest of the season. The inside-outside tandem of Hammons and Johnson is particularly promising and exciting. I can?t wait to see these guys next year-or even in March.

That 1-3 start in Big Ten play doesn?t have Illinois panicking. At least not yet. A big key to regaining form will be rediscovering the aggressiveness and shooting touch that made Illini so good during a 12-0 start that included wins over Gonzaga and Butler.

The early returns on new Nebraska coach Tim Miles are good. Very good, if you believe what other Big Ten coaches have to say about Miles.

Defense has been key for Nebraska, which still struggles to score and has a short bench. Still, don?t be shocked if the Huskers win a game or two they aren?t supposed to this season.

Kyle Meinke of MLive.com wraps up a neat series in which he graded Michigan position-by-position. Today, he grades the Wolverines? special teams. The kickers and punters excelled. The coverage units? Not so much so.

The great Mike Hlas of the Cedar Rapids Gazette tells us that Iowa was the only one of 124 FBS schools to use just one quarterback last season.

Hlas says that in the Big Ten, ?Nebraska and Penn State didn?t stray from Taylor Martinez and Matthew McGloin much. Penn State backup Steven Bench threw eight passes, and Nebraska No. 2 Ron Kellogg II threw nine. Seven Big Ten teams used three quarterbacks. For some, like Ohio State, it was a luxury. For others, it was a necessity.?

New Wisconsin defensive coordinator Dave Aranda has no plans to make any major alterations to a Badgers defense that has been pretty good.

For Aranda, who was pursued by Cal and Texas Tech in the offseason, it?s all about being aggressive and forcing turnovers. He won?t use a 3-4, like he did at Utah State, but will retain a 4-3 while using some principles of a 3-4. It?s all about being adaptable and playing to the strengths of your personnel. And Wisconsin has a good d-line.

Tom Izzo was correct about "the Gallegos kid" needing to catch fire. Ray Gallegos is 9-of-44 on three-pointers in #B1G games.

My take: The guy has game-maybe even NBA game, if you listen to some people.

Watching tape on Wisky..Dekker and Tray Jackson really confident and improved since Marquette..Jackson has become a comfortable leader

My take: Two promising youngsters who will need big games tonight at Indiana if Wisconsin wants to win.

Groce sticking with practice routine but he's leaning on captains to take a more urgent role in getting team mentally ready to play. #dechr

My take: This team has the talent, so the recent issues have to mental, right?

Beilein: Would prefer to have a set rhythm like in the conferences who play defined nights every week

My take: I agree. I loved the days when Big Ten games were almost exclusively played on Thursdays and Saturdays.

My take: Can?t believe it has been this long.

Izzo on Adreian Payne: He does have a scorer's mentality now. I'd still like to see him shoot that jump hook and get to the FT line more.

My take: The guy is a freak who still has lots of untapped potential.